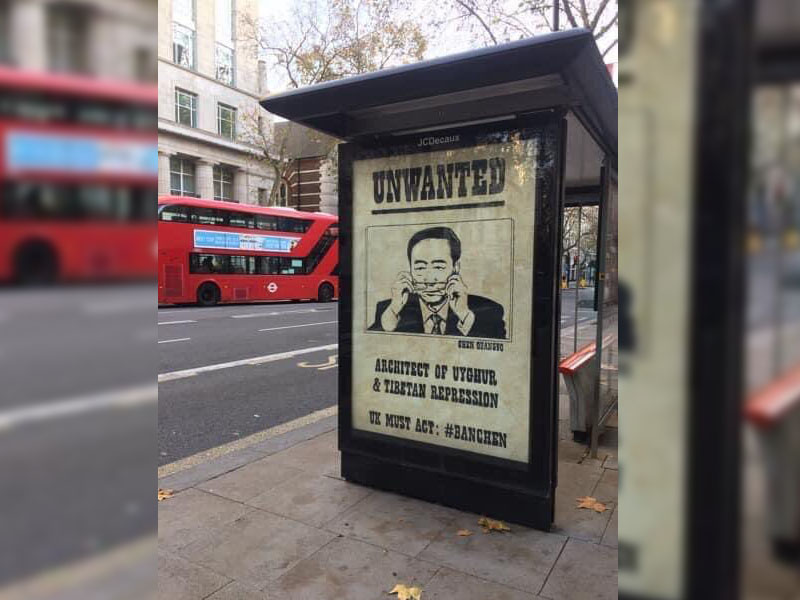 The messages on the boards urge the United Kingdom to act against the Chinese leader for the repression of Uyghurs and Tibetan communities, reports ANI.

Chen is considered as the person behind the draconian security apparatus in Tibet and a mastermind behind the camps in Xinjiang which incarcerate over a million Uyghur minorities, the news agency reported.

Chen Quanguo, a member of the 19th Politburo of the CCP, is expected to take control of the Central Administration in future.

In July, the UK launched its new Magnitsky-style sanctions against human rights-abusing regimes. It named 49 individuals and organisations who are involved in some of the “most notorious human rights violations and abuses in recent years” around the world, reports ANI.

Chen is most ruthless Chinese leader ever to have ruled Tibet and East Turkistan, the news agency reported.

Coming down heavily on China's treatment of Uyghurs and other Muslim minorities of China, United States Secretary of State Mike Pompeo had called the Chinese actions as 'stain of the century'.

In an official statement issued on Friday, Pompeo said that the US is leading the world in taking action against the Chinese government for their mistreatment of their Muslim minority.

"The Chinese Communist Party’s human rights abuses in Xinjiang, China against Uyghurs and other Muslim minorities rank as the stain of the century. The Trump Administration has led the world’s effort to impose tangible costs on the PRC’s continuous campaign of repression, mass arbitrary detention, intrusive surveillance, forced labor, forced population control, involuntary collection of biometric data, and genetic analyses targeted at these groups."

Pompeo announced the Trump administration's decision to impose sanctions on the Xinjiang Production and Construction Corps (XPCC), a paramilitary organization subordinate to the CCP.

"On July 9, 2020, the United States designated Chen Quanguo, the current First Party Secretary of the Xinjiang Production and Construction Corps (XPCC), for his connection to serious human rights abuse in Xinjiang. Following his arrival in the region, Chen Quanguo began implementing a comprehensive surveillance, detention, and indoctrination program in Xinjiang, targeting Uyghurs and members of other ethnic minorities. The XPCC has been directly involved in implementing these measures. Today, the U.S. has imposed sanctions on the XPCC."