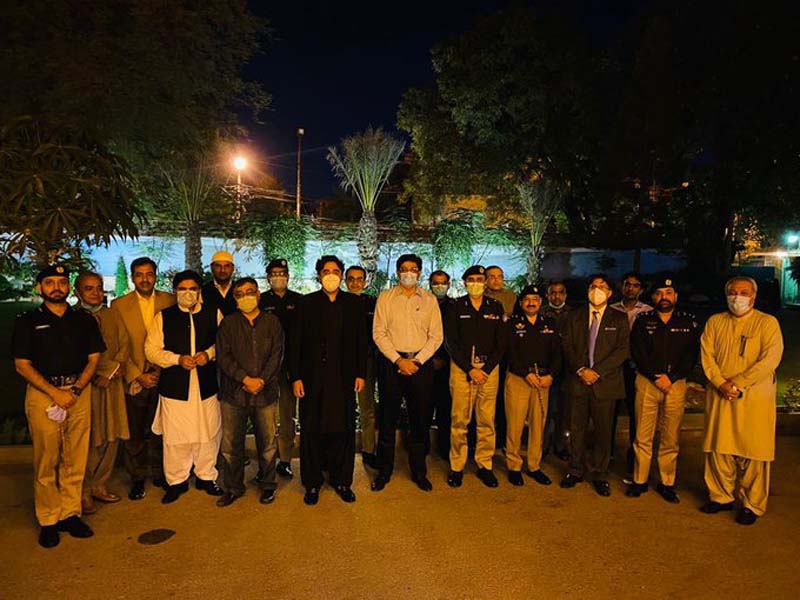 Karachi: The arrest of ex-prime minister Nawaz Sharif's son-in-law, Capt (retd) Muhammad Safdar, has triggered a bitter conflict between Pakistan Army and the Sindh Police, heightening the political tension buiding up in the nation ever since the opposition alliance displayed their strength against the Imran Khan government with two massive rallies.

The Pakistan Army Chief Gen Qamar Javed Bajwa has ordered an inquiry into the "Karachi incident", amid growing political turmoil over the arrest of Pakistani Muslim League (Nawaz) [PML (N)] leader Safdar Awan, the husband of political leader Maryam Nawaz Sharif who alleged that the Sindh police chief was forcibly taken to the sector commander's office and asked to sign on the arrest orders.

Sindh Police described the episode on Twitter as unfortunate and disrespectful. "Unfortunate incident that occurred on the night of 18/19 October caused great heartache and resentment within all ranks of Sindh Police," it posted.

The arrest took place at a time when the Pakistan Democratic Movement (PDM), an alliance comprising 11 of the country’s opposition parties, hold a massive rally in Karachi on Sunday, challenging PM Imran Khan-led government.

He has directed the Karachi Corps Commander to "immediately inquire into the circumstances to determine the facts and report back as soon as possible", according to the statement issued by the Inter-Services Public Relations (ISPR), reports Dawn News.

While the ISPR did not specify which incident it was referring to, the statement came minutes after PPP Chairperson Bilawal Bhutto-Zardari called on Gen Bajwa and Director General Inter-Services Intelligence (ISI) Lt Gen Faiz Hameed to investigate the circumstances surrounding the arrest of PML-N leader retired Capt Mohammad Safdar in Karachi a day earlier, reported the newspaper.

Safdar and his wife, PML-N Vice President Maryam Nawaz, were in the city to attend a rally of the opposition's Pakistan Democratic Movement (PDM) when he was arrested from their hotel early on Monday morning. He was subsequently released on bail, reports Dawn News.

Addressing a press conference in Karachi, Bilawal was quoted as saying by Dawn News that all top officers of Sindh Police were wondering "who were the people who surrounded" the Sindh police chief's house in the early hours of Monday and took him to an unspecified location before Safdar was arrested.

He also demanded to know the identities of "the two people who went inside the IG's house" and where they allegedly took the police chief at around 4am.

"I demand of DG ISI Faiz Hameed and Chief of Army Staff Gen Bajwa to investigate your institution [and] how it is operating in this province," the PPP leader said, adding that the provincial government will carry out its own inquiry.

Following Safdar's arrest, a purported voice message by PML-N leader and former Sindh governor Muhammad Zubair was shared by a journalist in which Zubair alleged that the inspector general of police was kidnapped and forced to register the first information report against Maryam, her husband Safdar and 200 others for violating the sanctity of Quaid-i-Azam Mohammad Ali Jinnah's mausoleum, reports Dawn News.

Maryam had also alleged that the Sindh police chief was forcibly "taken to the sector commander's office and asked to sign on the arrest orders", reports Dawn News.

Pakistan Maritime Affairs Minister Ali Haider Zaidi rejected the allegations and tweeted: "Simple enforcement of the law in Sindh has become laughable due to the politicization of police by PPP for 12+ years. How can they even think of publicly claiming that the IG was kidnapped in the middle of the night! Who are they trying to fool?"

Simple enforcement of the law in Sindh has become laughable due to the politicization of police by PPP for 12+ years.
How can they even think of publicly claiming that the IG was kidnapped in the middle of the night! Who are they trying to fool?

According to the Pakistani news channel, 12-13 police officers have submitted requests for leave.

The Twitter handle of Sindh Police posted: "The unfortunate incident that occurred on the night of 18/19 October caused great heartache and resentment within all ranks of Sindh Police. As a result, IG Sindh decided to proceed on leave and subsequently all ranks decided that they would also apply for leave to protest the humiliation meted out to Sindh police."

"This was a spontaneous and heartfelt reaction and made on an individual rather than a collective basis, because every single member of the department felt an acute sense of disrespect. Sindh police is immensely grateful to the Army Chief for realising the sense of hurt that prevailed within a uniformed force, and for promptly ordering an inquiry into the matter," it said.