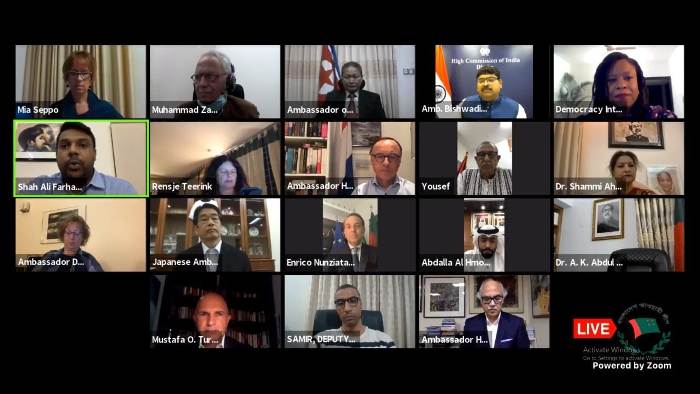 Dhaka: Diplomats stationed in Dhaka have praised Prime Minister Sheikh Hasina for her “able and prudent” leadership and tireless efforts in changing the course of national progress, braving a sea of challenges and setbacks along her way.

Impressed by the overwhelming course of development overseen by Sheikh Hasina, the diplomats and heads of foreign missions in Dhaka came up with the remarks for the Bangladesh Prime Minister terming her as a champion of human security.

Taking part in a webinar, organised by Awami League’s international Affairs Sub Committee on Saturday night, they also reiterated their commitments to help Sheikh Hasina in fulfillment of Vision 2041, set out by the Bangladesh Prime Minister.

“Bangladesh has consistently grown at a rate of 7% and despite the pandemic has clogged the growth rate of 5.2% in the last fiscal year –the progress achieved by Bangladesh in social indicators is also remarkable," he said.

"India is a committed development partner of Bangladesh and we look forward to building a shared and prosperous future on the foundation of our shared history, culture and our deep people to people linkages," said the Indian diplomat.