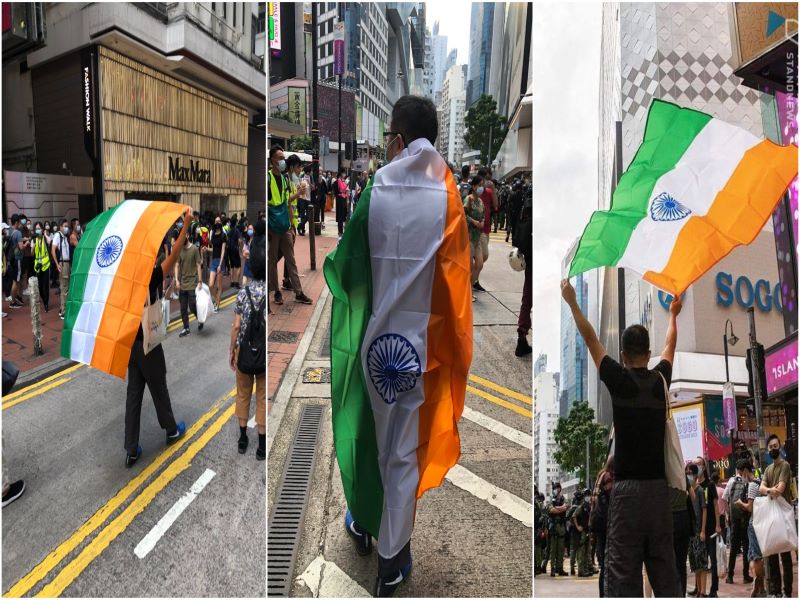 'Because India Is Fighting China. So India Is My friend!': Hong Kong pro-democracy protester who wrapped himself in Tricolour

HongKong/IBNS: Pro-democracy protesters of Hong Kong seem to have found inspiration in India's strong resistance to China's unprovoked aggression as they wrapped themselves in the tricolour and marched on China's National Day in Causeway Bay on Thursday.

India's strong response to China's muscle flexing in Galwan Valley in Ladakh and later in Pangong Tso in Sikkim in a deliberate attempt to alter the status quo along the Line of Actual Control (LAC) is no secret and apparently set an example before several countries whose sovereignty has been threatened by China.

“Why are you wearing an Indian flag?”
“Because India is fighting China. So India is my friend!”

He is now holding the flag above his head, shouting “STAND WITH INDIA! 印度加油!” The crowd is applauding him. pic.twitter.com/UoKCip0X8K

Reporting from the spot, the journalist further said, "He is now holding the flag above his head, shouting STAND WITH INDIA... The crowd is applauding him."

Undeterred by the heavy police presence, the man walked on the street wearing the Indian flag as tens of thousands of Hong Kong nationals marched, chanting slogans like "Disband the police" and "Liberate Hong Kong, Revolution of our Times", said media reports.

Ray Chan, a Parliamentarian of Hong Kong also took to Twitter to post some pictures from the protest.

"HongKong and India shared a long history. Tens of thousands of  Hong Kongers of South Asian heritage were born here. This gentleman feels a tribute to the Indian nation is long overdue, so he honors the tricolour on China's national day. #October1stProtest #HongKongProtests," he wrote.

#HongKong & #India shared a long history. Tens of thousands of #HongKongers of South Asian heritage were born here. This gentleman feels a tribute to the Indian nation is long overdue, so he honors the tricolor on China's national day. #October1stProtest #HongKongProtests pic.twitter.com/rIf6y0CUdv

Media reports said at least 86 people were arrested by Hong Kong police on charges of unauthorised assembly on the Chinese Foundation Day.

As China came under global attack on coronavirus, for hiding information, allowing the spread of the deadly virus to the rest of the world and making the World Health Organisation (WHO) its ally in hiding the mismanagement of the highly contagious illness, it tried to threaten several countries, mostly in the Asia-Pacific region with unprovoked aggression.

Its response is also being seen as an attempt to intimidate countries like India where several companies have announced to shift their units, taking a cue from the current pandemic and previous episodes of deadly outbreaks emanating from China.

Despite this, Hong Kong protestors have continued to take on the Chinese government, some being creative to ‘annoy’ China.

For over a year, Hong Kong has been protesting and raising voice against the Extradition Bill that allows Chinese government to detain and transfer people wanted in territories and countries with no formal extradition agreements.

The bill also includes the Chinese mainland and Taiwan

People of Hong Kong who oppose Beijing's increasing control over the semi-autonomous city now mark the founding day of the People’s Republic of China, as a day of protest.

Large-scale protests are banned because of social distancing restrictions due to coronavirus.

However, the dip in anti-government protests has been mostly because of the national security law imposed by Beijing on June 30.