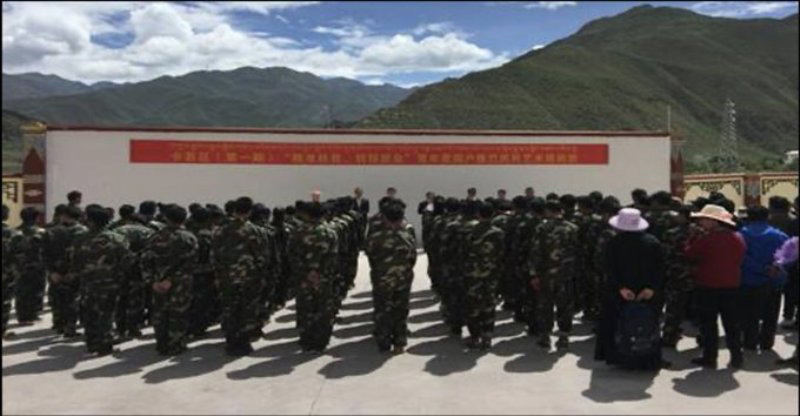 Washington DC: A US-based think -tank is claiming that labourers in Tibet are forced to join military-style training camps similar to the one built and run for years by the Chinese government in the western Xinjiang region.

In his article published in Washington-based research and analysis group The Jamestown Foundation, researcher Adrian Zenz said: "In 2019 and 2020, the Tibet Autonomous Region (TAR) introduced new policies to promote the systematic, centralized, and large-scale training and transfer of “rural surplus laborers” to other parts of the TAR, as well as to other provinces of the People’s Republic of China (PRC)."

"In the first 7 months of 2020, the region had trained over half a million rural surplus laborers through this policy," the researcher wrote.

"This scheme encompasses Tibetans of all ages, covers the entire region, and is distinct from the coercive vocational training of secondary students and young adults reported by exile Tibetans (RFA, October 29, 2019)," he said.

"The labor transfer policy mandates that pastoralists and farmers are to be subjected to centralized 'military-style' vocational training, which aims to reform 'backward thinking' and includes training in 'work discipline,' law, and the Chinese language," he wrote.

"This draconian scheme shows a disturbing number of close similarities to the system of coercive vocational training and labor transfer established in Xinjiang," he said.

"The fact that Tibet and Xinjiang share many of the same social control and securitization mechanisms—in each case introduced under administrations directed by Chen Quanguo—renders the adaptation of one region’s scheme to the other particularly straightforward," he said.

He said: "In both Xinjiang and Tibet, state-mandated poverty alleviation consists of a top-down scheme that extends the government’s social control deep into family units.

The researcher said both regions have by now implemented a comprehensive scheme that relies heavily on centralized administrative mechanisms; quota fulfilment; job matching prior to training; and a militarized training process that involves thought transformation, patriotic and legal education, and Chinese language teaching.