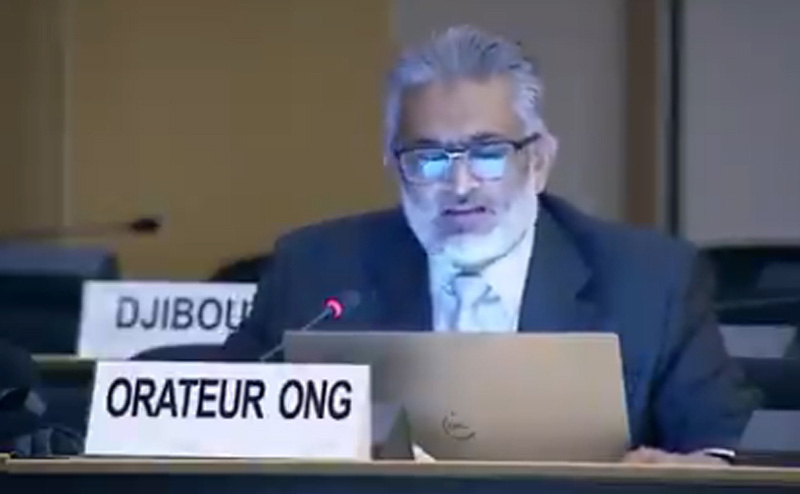 Stop Pakistan from treating us like animals: PoK activist breaks down at UNHRC

Geneva: The torture meted to people of  Pakistan Occupied Kashmir (POK) was reflected in the hard-hitting words of activist Muhammad Sajjad Raja as he broke down in the United Nations Human Rights Council (UNHRC), appealing the global body to stop Pakistan from treating them like animals.

While making an intervention during the 45th Session of the UNHRC in Geneva on Thursday, Raja said POK election Act 2020 has taken away all constitutional, civil and political rights of the citizens of the region.

“We the people of Pakistan occupied Kashmir plead the council to stop Pakistan from treating us like animals," he said breaking down into tears while delivering his speech.

"The POK election Act 2020 has taken away all of our constitutional, civil and political rights," he said.

#BREAKING: Pakistan Occupied Kashmir local resident Muhammad Sajjad Raja broke into tears at UNHRC in Geneva as he said Pakistan was treating them as ‘animals’. Says, Pakistan is running terror camps in so called ‘Azad Kashmir’. Begs before United Nations in tears for some help. pic.twitter.com/2QAEISaf49

"Our activities opposing accession to Pakistan have been declared anti-state in flagrant violations of United Nations Resolutions," he said.

On the recent development in the Gilgit-Baltistan region, he said: “Pakistan is now trying to declare disputed territory of Gilgit Baltistan as its province, thus, depriving our people of their land and their identity and culture. Pakistan’s revisionist moves would throw the whole world into a brutal war.”

He said the people of PoK are treated as 'traitors'.

He claimed Pakistan is 'brainwashing innocent youth' on both sides of the border in Jammu and Kashmir making them cannon fodder in the proxy war with India.

"Pakistan continues to run terror camps from POK,” he said.