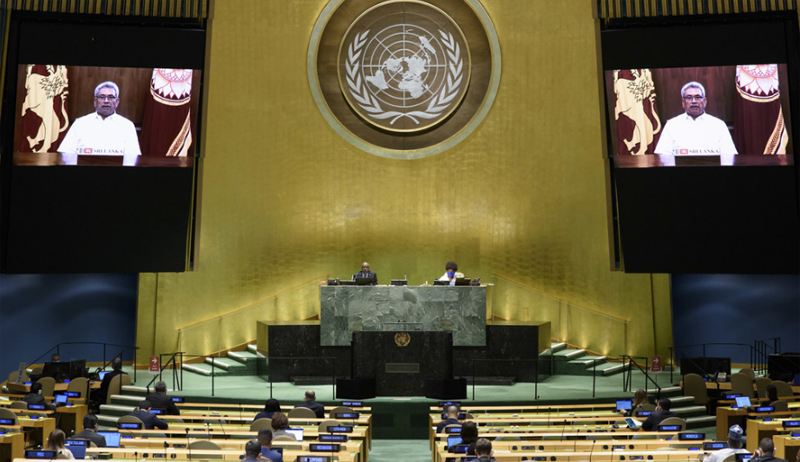 New York: The President of Sri Lanka has highlighted the success of his country’s response to the COVID-19 pandemic, underscoring the importance of a well-coordinated approach, underpinned by robust local health care system, to contain the disease.

In a pre-recorded address to the United Nations General Assembly’s annual debate, President Gotabaya Rajapaksa explained that his Government’s “inclusive, non-discriminatory and holistic” measures were key to saving lives and protecting people’s health.

These measures include, financially supporting low-income families, pensioners, persons with disabilities, day-wage earners, farmers, and disadvantaged groups, and managing the repatriation of Sri Lankans in a coordinated manner, he said.

President Rajapaksa also voiced his country’s support to the work of the UN World Health Organization (WHO), calling on the UN heath agency to facilitate “universal access” to a COVID-19 vaccine, once developed.

The vaccine “should be designated as a basic public good and be affordable and obtainable by all,” he emphasized.

Alongside this, the Sri Lankan leader expressed deep concern over the economic impact of the pandemic on developing countries and urged debt relief and financial stimulus for the affected nations be duly recognized.

President Rajapaksa also reiterated his country’s commitment to the 2030 Agenda for Sustainable Development and protecting its environment, informing the UN Assembly of his Government’s initiatives to eradicate extreme poverty and improve access to education.

“A cost-free official e-learning portal for school children, with the support of telecommunication operators, has successfully contributed towards home learning during the pandemic,” he cited as an example.

Having experienced decades of separatism and terrorism, Sri Lanka condemned all terrorist acts in the strongest possible terms, be it domestic or international, underscored President Rajapaksa, calling on the international community to stand in solidarity with his country against the scourge.

“As a nation that has witnessed the bitterness of war, Sri Lanka is committed to promoting peace across the world,” he added.

The Sri Lankan President also underlined the need to end “political witch hunts” through questionable motives against Member States. Doing so, he said, would ensure the sustainability and the credibility of the United Nations.

“I wish to re-iterate the importance of the UN Charter which enshrines the protection of sovereignty, territorial integrity of States and non-interference in their domestic affairs,” added President Rajapaksa.