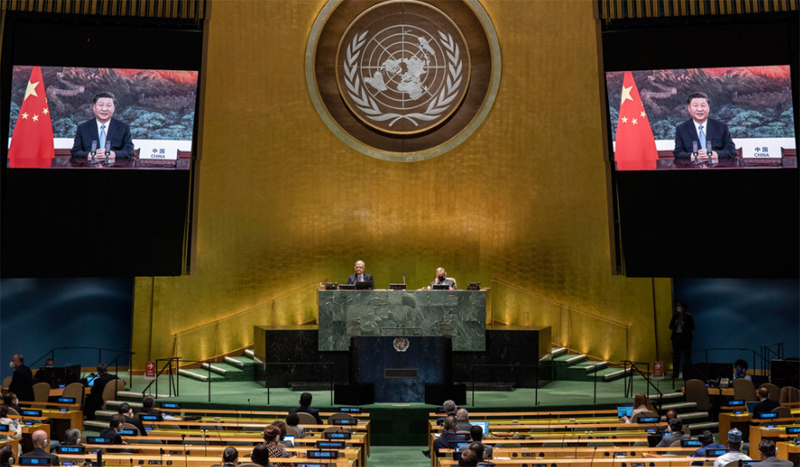 New York: The Chinese President Xi Jinping called for enhanced international solidarity to fight the coronavirus on Tuesday during his UN General Assembly address, declaring that his country would aim to become carbon neutral, in the wider battle against climate change, by 2060.

“We should follow the guidance of science, give full play to the leading role of the World Health Organization (WHO) and launch an international response to beat this pandemic”, he said.

Prior to his pre-recorded video address in the General Assembly Hall, he was introduced by UN Ambassador Zhang Jun, who without citing the United States specifically, pushed back against President Donald Trump’s call minutes earlier, for China to be held “accountable” for unleashing the virus.

Declaring that “humanity will win this battle” against the virus, President Xi spoke out against finger pointing: “Any attempt of politicizing the issue, or stigmatization, must be rejected”, he said.

“We should see each other as members of the same big family, pursue win-win cooperation, and rise above ideological disputes…More importantly, we should respect a country’s independent choice of development path and model”, he added.

He said the world should not “dodge the challenges of economic globalization” calling for inclusive and fair development, an “open world economy” and upholding multilateral trade, “with the World Trade Organisation (WTO) as the cornerstone.”

Spurred on by the devastation wrought by the virus, he said a “green revolution” was needed, in order to preserve and protect the environment. “The Paris Agreement on climate change charts the course for the world to transition to green and low-carbon development.”

Calling for all countries to honour the historic Paris Agreement, President Xi said China would increase its Nationally Determined Contributions by adopting new policies and measures.

“We aim to have CO2 emissions peak before 2030 and achieve carbon neutrality by 2060. We call on all countries to pursue innovative, coordinated, green and open development for all”.

He said multilateralism “with the UN at its core”, was essential, calling on all leading economies to “provide more global public goods, take up their due responsibilities and live up to people’s expectations.”

Commitment to China and the world

The Chinese premier said his nation had made an “all-out effort” to control the coronavirus and speedily restore life and economic growth, adding that he was confident they would manage to meet the poverty eradication target set out in the Sustainable Development Goals, a decade ahead of schedule.

‘China will continue to work as a builder of global peace, a contributor to global development and a defender of the international order”, he added, announcing a new injection of $50 million for the UN COVID-19 Global Humanitarian Response Plan.

He also pledged $50 million to the China-FAO South-South Cooperation Trust Fund (Phase III) and announced an extension of the Peace and Development Trust Fund between the UN and China, by a further five years beyond 2025.

In addition, he announced the setting up of a UN Global Geospatial Knowledge and Innovation Center, and an International Research Centre of Big Data, for the SDGs, to help advance the overall 2030 agenda.