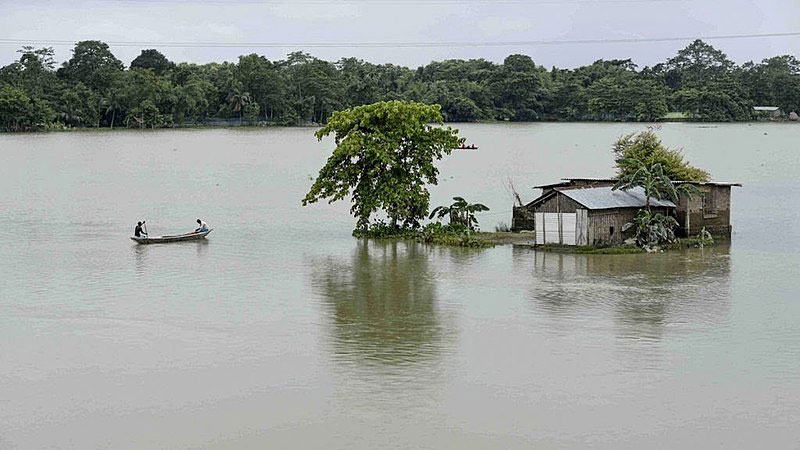 Six rivers in Central Bangladesh continued to be in spate as almost half the country remained in the grip of floods until Tuesday, over a month after monsoon flood hit the country in late June.

The central Bangladesh rivers such as the Dhaleswari, Shitalakkhya, Balu, Turag, Kaliganga and Tongi Khal swelled up to 15 cm , flooding fresh areas in Dhaka and its adjacent districts.

Flood remained largely unchanged in the northern area as the water level in the river Dharla remained unchanged while that of Brahmaputra, Jamuna and Padma drained slowly.

He said that the flooding in central Bangladesh could get a little worse during the time but the overall situation would remain unchanged.

The number of flood victims crossed a quarter million in Dhaka as the flooding turned severe in a number of central districts with further deterioration of the situation predicted through Wednesday.

'We can say that the situation cannot get worse than it is now. And the situation is going to stay the same for a while,' said Raihan.

An FFWC bulletin issued on Monday afternoon showed that the river Dharla in Kurigram continued to flow 7cm above its danger level with no change in its water level recorded in the 24 hours until 0900 hrs on Tuesday.

Many rivers such as the Padma in Bhagyakul and Mawa, Gur in Singra, Titas in Brahmanbaria, and Atrai in Baghabari fell 5cm or less during the same time, continuing to flow up to more than one metre above their danger marks until Monday.

In central Bangladesh, rivers such as Turag swelled the most between Monday and Tuesday mornings, flowing 23 cm above the danger mark after a 15 cm rise over the last 24 hours.

Nearly half of my constituency is under water, said Atikur Rahman, councillor of ward No 70, Dhaka South City Corporation.

He said that the situation worsened as the Balu kept swelling and there was no embankment to protect their part of the city when the river overflowed.

About three-fourths of ward 70 in the DSCC got flooded, disrupting the local road communication severely.

All six upazilas in Dhaka were more or less affected by the flood. Dohar emerged as the worst hit with the entire upazila going under water as the River Padma continued to flow 71cm above its danger mark at Bhagyakul.

It has been more than a month for some rivers since they first spilled their banks and continued flowing above their danger marks ever since affecting over 4.8 million people, according to official estimate.

The prolonged flood so far killed 129 people and brought immense sufferings to hundreds of thousands who are stranded at home or sheltered on embankments.

Misery became a part of their existence with little to eat and almost no water safe enough to drink.

Tangail district reported that the sufferings of about three lakh people stranded in floodwaters in 11 of the 12 upazilas in the district persisted as government gave little attention to alleviate the flood-related problems.

At least 750 villages got flooded in Tangail and over 300km of road were partly or completely damaged alongside 165 bridges.

Tuesday as the number of families affected by the flood in four of the six upazilas in the district stood at 32,000.

In Lalmonirhat DC office confirmed that the Dharla and Teesta continued to erode their banks as they devoured 183 houses between Monday and Tuesday.

So far 15,612 houses were lost to erosion in eight flood- affected districts in Rangpur division as four villages got completely wiped off the northern Bangladesh map since late June.

Over half a million people are stranded in the division as vast areas, especially in Kurigram district, remained submerged in water.

Meteorologist Abdul Mannan said that rivers drain slowly at this time of the year because of high water level in the Bay of Bengal.

There is a strong wind over the bay pushing waters coastward, further delaying the draining of rivers,’ said Mannan.