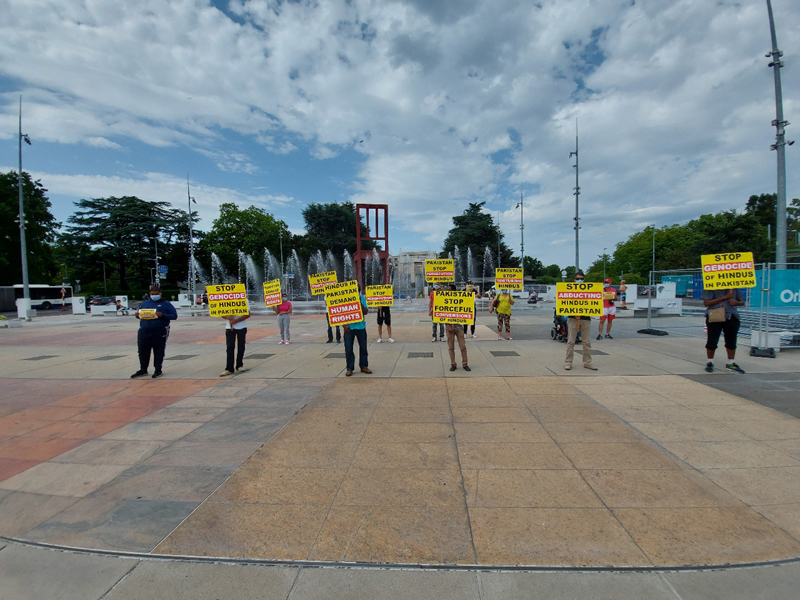 Geneva: A group of protesters gathered at UN Headquarters in Geneva during the 44th Session of UN Human Rights Council to highlight the plight of Hindus in Pakistan and to protest against the persecution faced by them.

Hindus in Pakistan are systematically marginalised, persecuted and discriminated which led to an increased level of violence notably religiously motivated kidnapping, assault, sexual crimes and murder.

Hate messages against Hindus, who form a minuscule minority in Pakistan, are routinely expressed by Pakistani lawmakers and politicians.

The hard-line radical Islamists in Pakistan opposed the construction of a Hindu temple in Pakistan claiming that it is contrary to the idea of Pakistan, which is Islam.

In a recent testimony of the level of religious intolerance and hatred, a Hindu temple in Sindh was brutally attacked by an Islamist mob.

The attacks are often orchestrated by Islamist leaders who enjoy patronage and protection by the Pakistani government.

Hindus, Sikhs and Christians, the minority communities in the Islamic Republic of Pakistan have been constantly under attack by the Islamist fundamentalists.

For the upholders of the Ideology of Pakistan, the existence of Pakistan is defined only in relation to Hindus, and hence the Hindus have to be painted as negatively as possible, especially in the glorification of jihad against India.

Pakistan's persecution of minorities was exposed in a poster put up by a leader of Pakistan Prime Minister Imran Khan’s party, the Pakistan Tehreek-e-Insaf (PTI), in which he has issued a vile and demeaning open threat to Hindus.

Hindus in Pakistan are horrifically attacked and any efforts towards eradicating the violence, prejudices, and inequalities has been virtually imperceptible, the protesters said.

They raised their voice seeking help of the United Nations and international communities to safeguard the innocents suffering lives of Hindus in Pakistan and make stringent laws so that the Prime Minister Imran Khan cannot make repeated bogus commitments to protect Pakistan’s religious minorities.