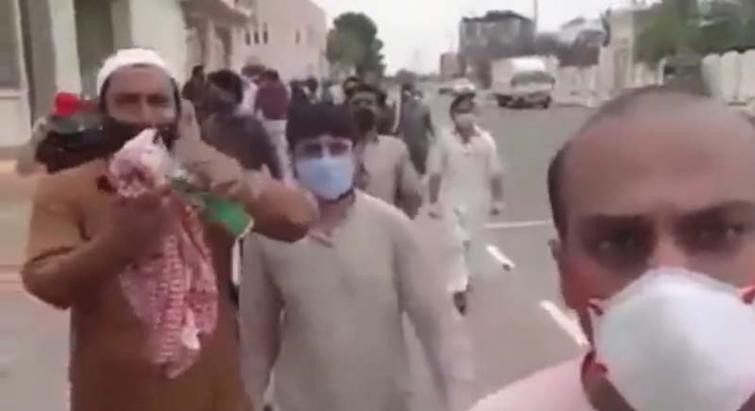 Dubai/IBNS: The Imran Khan government in Pakistan is under attack by Pakistanis stuck in Dubai and desperate to return home amid COVID-19 outbreak.

Recently, Pakistanis were seen protesting in front of the Pakistani embassy in the city  demanding to be taken back to their home country and accusing it of selling tickets at a very high price.

Police soon dispersed them as the protesting crowd were seen flouting social distancing norms during their demonstration.

Amidst the travel restrictions imposed in the Gulf State, more than 20,000 Pakistanis are stuck in the UAE, media reports said.

According to reports, they had registered with the Pakistan Consulate on Apr 3 to return to their home country.

The protesting Pakistanis also alleged that the embassy was selling tickets at very high prices.

They even questioned the Pakistani government asking if they had voted PM Imran Khan to power in 2018 for this.

Earlier this year, when the virus had first emerged in Wuhan city of China, Pakistan had rejected the appeal of evacuation of its own students stranded in foreign land.

Several videos of Pakistani students appealing their government for evacuation and help had gone viral on the social media.

Pakistan and China are apparently all-weather allies of each other.

India had evacuated its citizens at that time from the virus-hit region of the country.

Shocking the world and his own citizens, Pakistan President Arif Alvi resorted to preaching Islam to fellow Pakistanis stuck in China instead of advising the Imran Khan-led government on the urgent need of evacuating their citizens at that time of the year.