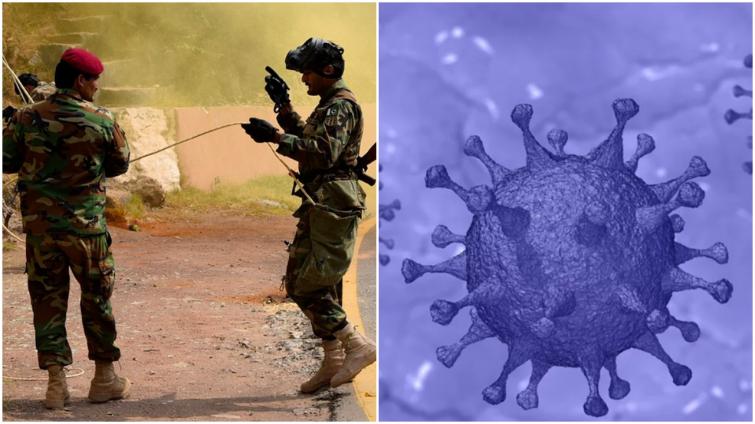 Islamabad/IBNS: A Baloch leader has claimed that the Pakistani military is using the Coronavirus outbreak in the nation to expand its occupation and grip in Balochistan, media reports said.

Allah Nizar Baloch, the leader of Balochistan Liberation Front (BLF), was quoted as saying by Sangar Publication, a mouthpiece of the movement as reported by ANI news agency: "We believe that the Pakistan Army would use the COVID-19 outbreak to expand its occupation and stranglehold over Balochistan while continuing its atrocities and genocide of the Baloch."

Referring to Taftan area and the quarantine camp established in the region, the BLF leader said the disaster in the centre located in the Iran-Pakistan town, which is run by Pakistan Army,  is a 'clear example' of it.

According to reports, locals have criticised the quarantine centre in Taftan due to a lack of proper medical and social isolation facilities.

People staying in the camp have complained about the poor condition of the facility.

"The environment here is so filthy that if a person stays here for a while, even if they are healthy, they will get coronavirus," Fatima Bibi, a woman staying at the camp told Al Jazeera. "We appeal to the government to allow us to leave here as quickly as possible."

People even complained that they were not adequately screened for COVID 19.

People currently in the camp told Al Jazeera they were not being adequately screened for coronavirus or treated for existing conditions.

"We are not given blankets, nor is there a place to shower, nor do we get proper food," Khanum Jan, a woman staying at the camp told Al Jazeera.

Fatima Zahra, another woman in the camp, said "nothing is hygienic, nor is the food hygienic. And they have put such dirty toilets … they are incredibly filthy."

BLF leader Nizar claimed that the Pakistani Army is trying to spread the virus by keeping 100 infected patients with 4,000 non-infected people in the context of self-quarantine.

"The Army is deliberately spreading the virus in Balochistan by keeping around 100 infected patients of coronavirus together with the 4,000 non-infected people on the pretext of so-called quarantine. Now, this disease is continuously being spread throughout Balochistan in order to annihilate the already oppressed people of Balochistan," Nizar told ANI.

He said if the disease spreads in the Balochistan region then it will be uncontrollable.

"In case if this disease spreads across Balochistan, it would be uncontrollable. Balochistan, which lacks basic amenities of life including healthcare and the people of Balochistan, who in this modern age, are already dying from curable diseases like malaria, would be affected irrecoverably," Nizar said.

"For the last seventy years, the occupying forces have plundered the resources of rich Balochistan by selling them for a pittance. In return, the indigenous sons and daughters get atrocity, poverty and humiliation from Pakistan," he added.

"I appeal to the Baloch people that they should understand the machinations of Pakistan and prefer to stay in their homes and rely on preventive measures," the BLF leader told the news agency.

Meanwhile, fearing that COVID 19 outbreak might hit Pakistan Occupied Kashmir (PoK) and Gilgit Baltistan, local authorities have demanded strict restrictions for any traffic movement from Pakistan into the region.

Demands have been raised after seeing the rising number of positive Coronavirus cases in all provinces of Pakistan and attempts by Pakistan Army to bring them at quarantine centres set up in PoK and Gilgit Baltistan, reported ANI news agency.

Sources told ANI that hundreds of people got stuck at Kohala border of PoK and Punjab on Thursday after the restrictions imposed by the local authorities.

In a letter written to Commissioner, Mirpur division, the locals have raised the issue of Coronavirus positive patients from Gujrat and Jhelum cities of Punjab province to be brought into PoK, reported the news agency.

Junaid Qureshi, a Kashmiri Researcher told ANI, "From East to West, the world is fighting this pandemic by social-distancing, lockdowns, research for medicines and vaccines and economic packages and stimuli for its citizens, and at the same time, Pakistan is disposing of its citizens in its colony, which puts the very underdeveloped region of Pakistan occupied Jammu and Kashmir and the people living there at great risk of facing catastrophic health and economic consequences".

The country has recorded 12 deaths.

However, reports are emerging that Pakistan is not taking steps to close the mosques across the country as they fear to receive a backlash from the fundamental clerics.

The fact remains that the fundamentalist clerics are crucial for Pakistan's proxy wars in Afghanistan and India, especially Jammu and Kashmir, reported Zee News.

According to media reports, the clerics have the support of the Pakistan Army.

The current scenario gives rise to a major concern as the mosques nationwide remain open for Friday Namaz as well as daily prayers, reported Zee News.

Many people who have been found to be coronavirus positive had attended the Tablighi Jamaat programme in Lahore, reported Zee News.

"I think everyone who attended the Lahore Ijtima must must stay in isolation and get himself tested as soon as possible," the official tweeted.

I think everyone who attended the Lahore Ijtima must must stay in isolation and get himself tested as soon as possible. https://t.co/g4noR3LJ4O

Even the Turkish media criticised Pakistan for not closing the mosques.

"Pakistan has crossed 1,200 confirmed cases of COVID-19, and the actual infected is likely significantly higher. Yet, unlike other countries like Kuwait, Saudi Arabia, and Egypt, Pakistan has not banned congregational prayers that pose a clear threat to public health," TRT World reported.