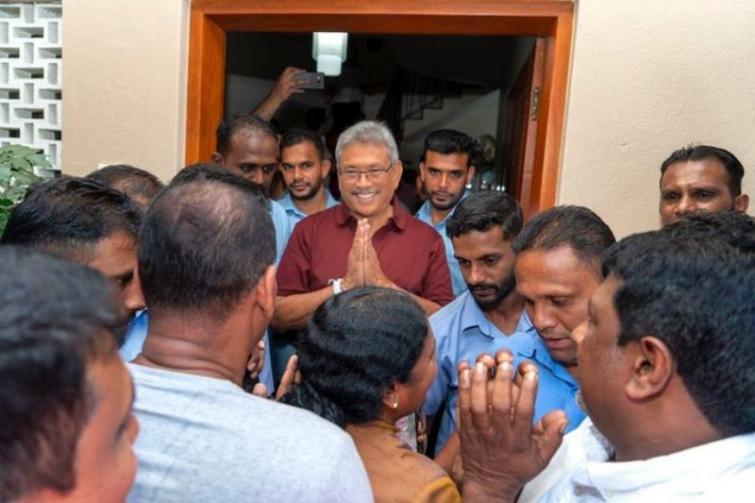 Colombo/IBNS: Almost seven months after a series of bomb-blasts shook Sri Lanka, the island nation on Sunday elected former war-time defence chief Gotabaya Rajpaksa as its President. He will be sworn in as the seventh executive President of Sri Lanka on Monday.

Sri Lanka's Election Commission Chairman Mahinda Deshapriya Rajapaksa declared  the win of Gotabya Rajpaksa's  who was the presidential candidate of Sri Lanka Podujana Peramuna(SLPP). He polled 52.25% or 69,24,250 votes in his favour at the election, while his nearest rival Sajith Premadasa of United National Party bagged  41.99% votes or 5,564,239 votes.

As the preliminary results predicted a clean sweep for Rajpaksa, Premadasa resigned from the post of housing minister.

Taking to social networking site, Twitter, Premadasa wrote, "It is my privilege to honour the people's decision and congratulate Gotabaya Rajapaksa on his election. I am grateful to our citizens who voted for me."

It is my privilege to honour the people's decision and congratulate Mr. Gotabaya Rajapaksa on his election. I am grateful to our citizens who voted for me. I am humbled that you placed your faith in me. Your support has been a fountain of strength throughout my political career. pic.twitter.com/CGYy1NCth2

After the final results were announced,  several other ministers including Mangala Samaraweera, Malik Samarawickrame and Ajith P Perera also resigned.

Rajapaksa, who fought the elections on the promise of strong leadership to the 22 million people, the majority of whom are Sinhalese Buddhists, faces strong opposition from Tamil political parties who allege him and his brothers of massive human rights violations during the last leg of the war against Tamil separatists in 2009.

The Muslim community, which is another large minority group in the country, has also alleged hostilities after the April terrorist attacks by the Islamic State.

After conceding defeat, Premadasa in a statement urged the incoming President not to persecute people who did not vote for him.

"I urge Mr. Rajapaksa to ensure that the post-election environment is peaceful, and that no citizen or NDF party supporter is persecuted or harmed for their role in supporting my candidacy," he stated.

In his statement, Premadasa said the just-concluded Presidential elections were the most peaceful in the history of Sri Lanka and requested the President-elect to maintain the "democratic gains and institutional reforms that took place over the past 5 years".

"My appeal to the incoming President is that he take this process forward and strengthen and protect the democratic institutions and values that enabled his peaceful election as the 7th President of Sri Lanka," he said.

I am deeply committed to serve all the people of Sri Lanka. #VisionInAction #GR2020 #GOTAWithYou pic.twitter.com/jETeIK0qH2

Rajapaksa, who is the younger brother of former Sri Lankan President Mahinda Rajapaksa, had played a major role in decimating Tamil separatists around 10 years ago.

In his statement after the declaration of his victory, Rajapaksa sent out a message of conciliation.

"I am grateful for the opportunity to be the President, not only of those who voted for me, but as the President of all Sri Lankans. The trust you have invested in me is deeply moving and being your president will be the greatest honor of my life -Let’s put our vision into action!" he said.

However, Rajapaksa's massive win is being viewed as a mandate emerging from the fear and insecurity of the majority community, especially after the series of IS sponsored bomb-blasts.