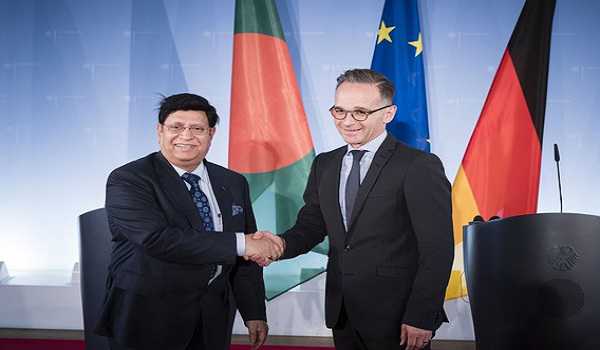 Dhaka, Oct 19 (UNI) Bangladesh Foreign Minister Dr AK Abdul Momen met his German counterpart Heiko Maas and urged him to put pressure on Myanmar for creating a conducive environment for the return of the Rohingyas who were forcibly displaced from their homeland.

In the maiden bilateral meeting with his German counterpart, Dr. Momen referred to the four points proposed by Bangladesh Prime Minister in 74 th UNGA last month, and urged German Government and the international community to take effective steps to ensure that Myanmar Government takes back Rohingyas with safety, security and dignity in a sustainable manner. He also sought Germany’s support in ensuring accountability for the atrocities committed against Rohingyas.

During the meeting, Dr. Momen also highlighted the success story of Bangladesh as the development miracle of the world, and called for Germen businesses to invest in Bangladesh, taking advantage of the country’s demographic dividend and lucrative investment promotion packages for Foreign Direct Investment (FDI).

The whole gamut of bilateral relations between the two countries were discussed in the meeting. German development cooperation for Bangladesh and existing strong business relations between the two countries were noted at the meeting, including the implementation of e-passport by German company Veridos, and involvement of Siemens AG Germany in energy sector.

While talking about global issues of mutual interest, Foreign Minister Momen flagged the Culture of Peace resolution pursued and promoted by Bangladesh at UN, and suggested that through practice of peaceful attitude and tolerance by states, most of the crises can be averted. German Foreign Minister deeply appreciated the humanitarian position of Bangladesh in providing shelter to Rohingyas.

He commended the economic and social development achieved by Bangladesh, and assured of support of Germany to Bangladesh in addressing the challenges of climate change.

Earlier during the day, Bangladesh Foreign Minister had meeting with Dr. Gerd Mueller, German Minister for Economic Cooperation and Development. During the meeting, Dr. Momen appreciated the development assistance of Germany to Bangladesh in areas like rural development, primary education, private sector development, renewable energy, climate effect and so on.

Terming Bangladesh’s Readymade Garment Factories safe, green, environment friendly Momen said Bangladesh has achieved tremendous development in labour safety and rights issues. Dr. Rubana Haque, President of the Bangladesh Garment Manufacturers and Exporters Association (BGMEA) participated at the meeting, and it was agreed in the meeting that Bangladesh RMG sector would join at the “Green Button” initiative of the German Government to promote environment and socially conscious textile products.

German Economic Cooperation and Development Minister was highly appreciative of the decision of Bangladesh to join the Green Button scheme.

He also referred to the collaboration between FES and Foreign Ministry of Bangladesh. Dr. Momen highlighted the importance of creating public awareness and dissemination of information globally about the persecution and atrocities suffered by the Rohingyas by the state of Myanmar. Foreign Minister suggested that FES, with their global presence, should take active role in this regard. Dr. Momen also talked about the Culture of Peace initiative of Bangladesh in UN, and stressed that through peaceful engagements, the instability and uncertainties in the current global issues can be resolved.