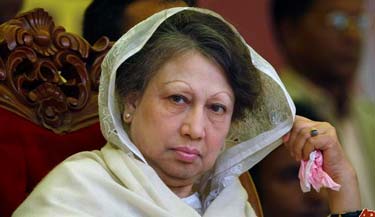 “The programme will continue until my further instruction. We will set the next course of action at an appropriate time,” Zia was quoted as saying by The Daily Star.

She said the ruling Awami League government has made the entire country a 'prison'.

She said no election took place in the country last year on Jan 5.

She is cordoned inside her office in Dhaka since Saturday night.

Amid  the announcements of counter rallies by the BNP-led 20-party alliance and ruling Awami League  to mark the  one-year anniversary of last year's parliamentary election, the Dhaka Metropolitan Police on Sunday banned all kinds of rallies for an indefinite period of time.


In a televised speech, Hasina asked Zia to focus on rebuilding her party.

"The path you're (Khaleda) walking will not usher in peace. You'll lose the people's support," Hasina was quoted as saying in her speech by bdnews24.com.