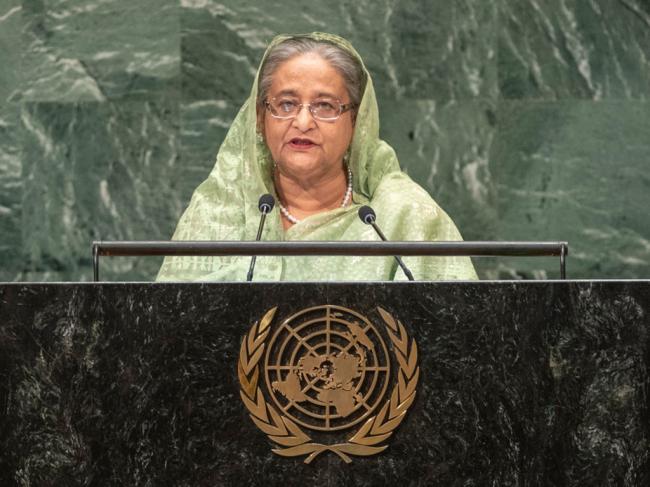 New York, Sept 28 (IBNS): The world cannot ignore or remain silent over the plight of the Rohingya people – driven from their homes in Myanmar and sheltering in Bangladesh – Prime Minister Sheikh Hasina, said on Thursday, urging world leaders for an early and peaceful solution to the massive refugee crisis.

“Myanmar is one of our neighbours. From the outset, we have been trying to find a peaceful solution to the Rohingya crisis through bilateral consultations,” said the Bangladeshi leader, noting that her country has concluded three refugee repatriation arrangements with Myanmar.

However, despite Myanmar’s verbal commitment to take back the Rohingya, the country is yet to accept them back, she added.

Prime Minister Hasina also recalled the five-point proposal she presented to the General Assembly last year, which outlined a durable and peaceful solution for the plight of the forcibly displaced Rohingya.

“We are disappointed that despite our earnest efforts we have not been able to begin Rohingya repatriation in a permanent and sustainable manner.”

She went on to note that the Bangladeshi Government is hosting some 1.1 million members of Myanmar’s minority Muslim Rohingya community and, supported by humanitarian organizations, including UN agencies, providing them with food, clothing, healthcare and security. Work is also underway to provide improved housing, as well as education and other services.

“I call upon international organizations to join hands with us in this initiative. I also seek their assistance to help relocate the Rohingya to the facility,” she added.

In her address, the Prime Minister of Bangladesh also spoke of her country commitment to UN’s peace efforts in various parts of the globe.