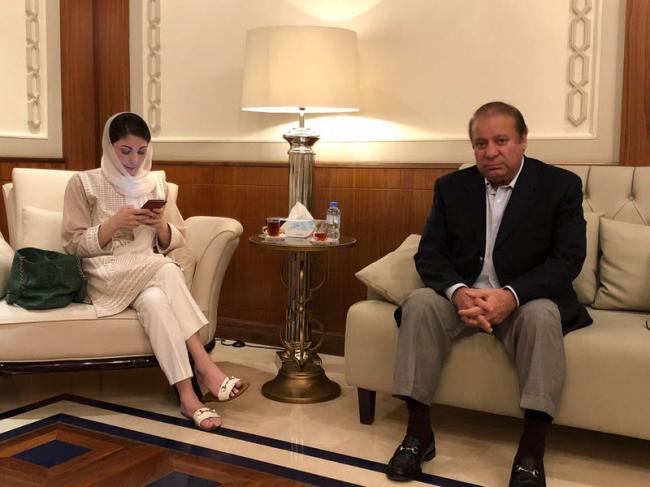 London, July 13 (IBNS): Grandsons of former Pakistan Prime Minister Nawaz Sharif Junaid Safdar and Zakariya Hussain have been released by the authority in London after a brief detention, media reports said on Friday.

"British authorities had arrested the two Thursday evening over a scuffle that had broken out near Avenfield House, the Metropolitan Police confirmed," Geo News reported.

The verbal argument between the Pakistan Muslim League-Nawaz's (PML-N) opponents and Junaid Safdar, the son of party supremo Nawaz Sharif's daughter, Maryam Nawaz, alongside Hussain Nawaz's son Zakariya, quickly turned into a physical brawl moments before the Met Police arrived to break up the fight, reported the Pakistan-based news channel.

Police have said further investigation into the incident is currently going on.

In a video obtained by Geo News, one protester can be seen trying to attack the two young Sharifs, with Junaid Safdar bowing out and saving himself in time. A verbal fight ensues again but, in the meantime, British police arrive.

Meanwhile, Sharif and his daughter Maryam Nawaz Sharif, who are convicted in a corruption case, are returning to Pakistan from London.

They were convicted by a Pakistani court last week.

Security has been beefed up in Lahore over the return of Nawaz Sharif and Maryam to Pakistan.

Pakistani authorities have said they will be arrested after arriving in the south Asia nation.

According to reports, Sharif and Maryam are currently in Abu Dhabi and their flight to Pakistan has been delayed by two hours.

They are now supposed to reach Pakistan after 8 pm.

In a video message earlier posted on Twitter, Sharif said: " I have done all that I could. I know I have been sentenced for 10 years and that I will be taken straight to prison.”

In a major blow to Nawaz Sharif ahead of the general elections, a Pakistani court last Friday handed over the former PM of the country a 10-year jail term over his family’s purchase of upscale London flats.

The former PM's son-in-law Safdar Awan was given a one-year sentence by the court.

Apart from the jail term, Nawaz has been handed a fine of eight million pounds.

The court has handed over 2m pounds fine by the court.