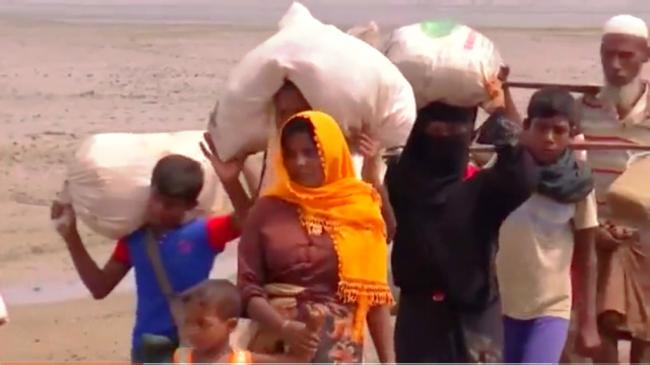 Cox’s Bazar, Nov 13 (IBNS):  An increase in the number of suspected measles cases among the newly arrived Rohingya and their host communities in southern Bangladesh has prompted the Government and UN partners to step up immunization efforts in overcrowded camps and makeshift shelters close to the border with Myanmar.

Nearly 360 000 people in the age group of six months to 15 years among the new Rohingya arrivals in Cox’s Bazar and their host communities, irrespective of their immunization status, would be administered measles and rubella  vaccine through fixed health facilities, outreach vaccination teams, and at entry points into Bangladesh.

Measles, a childhood killer disease which can be particularly dangerous among unimmunized and malnourished children,  is one of the major health risks among the over  611 000 people who have crossed over to Bangladesh from Myanmar since late August and are now living in cramped and insanitary conditions  in Cox’s Bazar district.

As of Nov 4, one death and 412 suspected cases of measles have been reported among the vulnerable populations living in camps, settlements, and among the host communities in Cox’s Bazar. Of them, 352 cases are from Ukhia and 46 from Teknaf sub-districts, and 11 have been reported from the district hospital. Majority of cases – 398 – are among the new arrivals and 14 among the host communities. As many as 82% cases are among children under five years of age.

“Children are especially at risk from outbreaks of measles and other communicable diseases that result from the crowded living conditions, malnutrition and severe lack of water and sanitation in the camps and other sites,” said Edouard Beigbeder, UNICEF Bangladesh Representative. “To halt any wider outbreak, it’s essential that coordinated efforts begin immediately to protect as many children as possible.”

With the risk of measles being high during such health emergencies, Ministry of Health and Family Welfare (MoHFW), with support of WHO, UNICEF and other local partners, was quick to roll out a measles and rubella (MR) vaccination campaign, between 16 September and 4 October, within weeks of the start of the recent influx of Rohingyas from Myanmar.

Nearly 136 000 children between six months and 15 years were administered MR vaccine. Additionally, around 72 000 children up to five years of age were given bivalent oral polio vaccine (bOPV) and a dose of Vitamin A to help prevent measles related complication.

The number of new arrivals has increased since the MR campaign, which also had challenges reaching out to all children in view of movement of people within the camps and settlements.

“As part of stepped up vaccination efforts, 43 fixed health facility sites, 56 outreach vaccination teams and  vaccination teams at main border entry points will administer MR vaccine to population aged six months to 15 years, along with oral polio vaccine to children under five years and TT vaccine to pregnant women. These efforts are aimed at protecting and preventing the spread of measles among the vulnerable population,” WHO Representative to Bangladesh, Dr N Paranietharan, said.

More than 70 vaccinators from government and partners have been trained to deliver routine vaccination though fixed sites and outreach teams beginning tomorrow, while vaccination at entry points at Subrang, Teknaf, is ongoing since 1 November.

As an additional measure, resources to treat measles cases are being reinforced with the distribution of vitamin A supplements, antibiotics for pneumonia and Oral Rehydration Salt (ORS) for diarrhoea related to measles. To improve hygiene conditions among the refugee population, 3.2 million water purification tablets and a total of 18,418 hygiene kits have been distributed benefitting 92,090 people.

The current initiative is yet another massive vaccination drive being rolled out for the new arrivals from Myanmar and their host communities in Cox’s Bazar since Aug 25 this year.

After covering 136 000 people in the September- October MR campaign, MoHFW and partners administered 900 000 doses of oral cholera vaccine to these vulnerable populations in two phases.

The first phase that started 10 October covered over 700 000 people aged one year and above  - both the new arrivals and their host communities, while the second phase from 4 – 9 November provided an additional dose of OCV to 199,472 children between one and five years, for added protection  and bOPV to 236,696 children under 5 years of age.