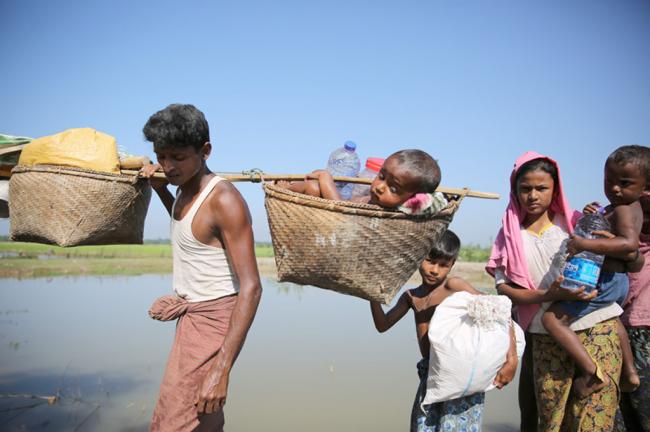 New York, Nov 3(Just Earth News):As more than 3,000 desperate, tired and hungry Rohingya refugees have crossed into Bangladesh from Myanmar over the past two days, United Nations agencies and their partners are working around the clock to provide urgent life-saving aid and shelter to this latest influx.

“Most people I talked to walked for eight to ten days to get to the border,” Olivia Headon, a press officer for the International Organization for Migration (IOM), said Friday, adding: “They had nothing to eat or drink after the first few days.”

Fleeing the violence which has convulsed their communities in Myanmar's Northern Rakhine state since late August, these latest arrivals, after waiting for low tide in the paddy fields near the border, join over 820,000 Rohingya refugees already living in some safety in Bangladesh's Cox's Bazar, where over 607,320 have arrived since 25 August.

Headon said the new arrivals expressed their desire to find family members who had already crossed into Bangladesh. Several explained they had hoped to leave Myanmar sooner, but had to wait to harvest and sell their grain to raise funds for their journey, she explained. “One man told me he had to pay someone to carry his elderly mother.”

Meanwhile, the Office of the UN High Commissioner for Refugees (UNHCR), the UN Children's Fund (UNICEF), and partners have distributed tokens, direct food supplies, and offered medical care for those at the Anjuman Para border crossing.

A reception area at Balukhali in the Bangladeshi city of Cox's Bazar, run by the IOM, is providing emergency assistance and self-settlement kits to improve living condition for the new arrivals.

UNHCR is also scaling up relief efforts to cope with the new influx of refugees around Kutupalong camp near Cox's Bazar.

“More than 2,000 of them have moved towards UNHCR's transit centre near Kutupalong camp, including some vulnerable refugees who were taken by bus,” Babar Baloch, UNHCR spokesperson told reporters at the regular press briefing in Geneva.

He added that this “comes as our staff just relocated over 400 recent arrivals to a new extension to Kutupalong camp.”

In related news, preliminary data from a nutrition assessment conducted last week at Kutupalong refugee camp in Cox's Bazar shows a 7.5 per cent prevalence of life-threatening severe acute malnutrition – a rate double that seen among Rohingya child refugees in May 2017, UNICEF said.

“The Rohingya children in the camp – who have survived horrors in Myanmar's northern Rakhine state and a dangerous journey here – are to already caught up in a catastrophe,” said UNICEF Bangladesh Representative Edouard Beigbeder. “Those with severe malnutrition are now at risk of dying from an entirely preventable and treatable cause.”

UNICEF and partners are treating over 2,000 acutely malnourished children at 15 treatment centres, with six additional centres currently being set up. The agency is also working with health partners to identify and treat diarrhoea and pneumonia, and will be conducting mass vaccination and nutrition screening campaigns this month.

“The humanitarian community needs to be able to do far more to treat and protect these extremely vulnerable children,” Beigbeder said. “For that we need far more attention to the crisis, and far more resources for the response. These children need help right now.”