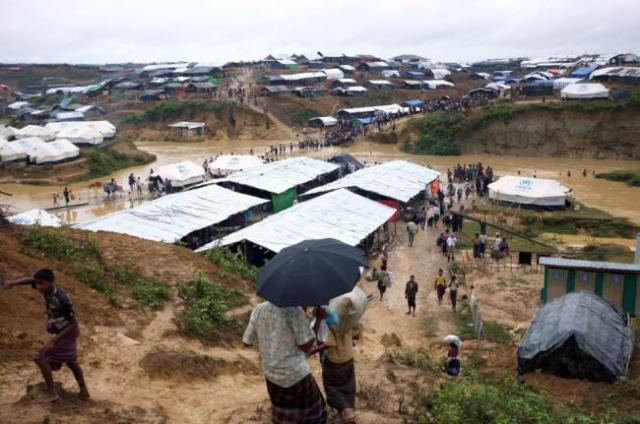 Earlier, Myanmar had accused the Rohingya Muslims of killing people in 28 Hindu villages in Rakhine state.

Hindus along with Buddhists have been displaced by the violence in the state.

The Myanmar government's Information Committee, on a Facebook post, said that mass Hindu graves had been found in the state.

The post said around 300 Arsa militants had attacked 100 Hindus and killed most of them.

The killing took place on August 25, the day when the conflict in the state started.

In last one month, more than 400,000 Rohingyas have fled Myanmar due to ongoing violence.

Even though they have the maximum stronghold in Myanmar, Rohingyas are also found living in certain parts of Asia.

The United Nations has blamed the Burmese army of indulging in ethnic cleansing.

However, according to the Burmese government, atrocities have been carried out by the Arakan Rohingya Salvation Army or ARSA, a Rohingya militant group, who promises to continued resistance until Rohingya demands for the restoration of citizenship rights within Myanmar are met.

On August 25, earlier this year, scores of ARSA militants struck at least 25 police posts across the two northern townships of Maungdaw and Buthidaung in Myanmar, resulting in the death of at least 100 people.

According to experts, radicalisation is slowly gripping the Rohingyas, who, historically have displayed a more timid attitude.

Experts also feel that the new age gun wielding Rohingyas are more prone to be sucked into terrorism and are likely to pledge alliance with global terror networks, thus exacerbating their already vulnerable state of affairs.

Even though the so called 'resistance' has proved to be disastrous, the young brigade is unwilling to budge from their stand.

However, it is an open secret now that Pakistan-based jihadists are contributing to the situation.

Evidences showed that Aqa Mul Mujahideen (AMM), responsible for the attacks in Myanmar, is an offshoot of Harkat-ul-Jihad Islami Arakan (HUJI-A), a Pakistan-based terror outfit which is involved with the Rohingya Muslim issue in Myanmar.

According to media reports, HUJI-A is headed by Abdus Qadoos Burmi, a Pakistani national of Rohingya origin, closely associated with LeT chief Hafiz Saeed, for training and radicalising Rohingyas.