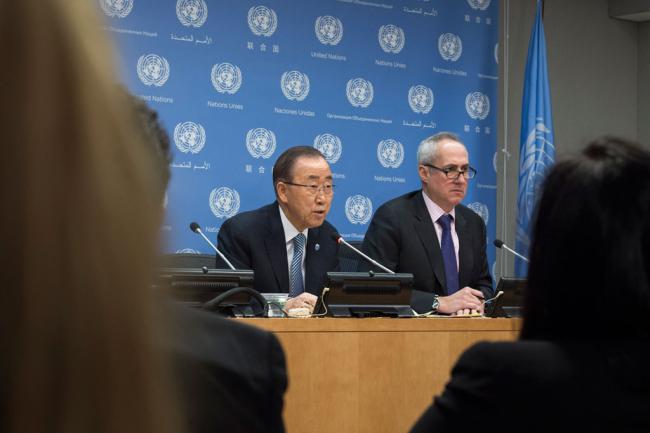 “Aleppo is now a synonym for hell,” Ban said at UN Headquarters in New York, bidding farewell to the UN press corps.

“We have collectively failed the people of Syria. Peace will only prevail when it is accompanied by compassion, justice and accountability for the abominable crimes we have seen,” he added.

On another front, he noted that this week will mark the third year of conflict in South Sudan, and he deplored that “the country’s leaders have betrayed their people’s trust, and squandered a peace agreement.”

“Most immediately, my Special Adviser [on the Prevention of Genocide, Adama Dieng] has warned of the risk of genocide,” he said, urging the UN Security Council to take more concerted action, including through punitive measures.

Ban will complete his 10-year service as the world’s top diplomat on 31 December, passing the baton to his successor António Guterres, who was sworn in this past Monday.

In his last press conference as United Nations Secretary-General, Ban Ki-moon on Fridaydelivered stark warnings on two issues at the forefront of international concern: Syria and South Sudan. Ban said “the carnage in Syria remains a gaping hole in the global conscience,” and that South Sudan faces a risk of genocide as the country's leaders have “squandered a peace agreement.”

“This has been a decade of unceasing test,” he said. “But I have also seen collective action change millions of lives for the better.”

He expressed continued support for the global momentum behind the Paris Agreement on climate change.

“Climate action means jobs, growth, cleaner air and better health. Leaders from across the globe and on every front understand this – from Fortune 500 CEOs [Chief Executive Officers] to Governors and Mayors,” he said. “The Paris Agreement on climate change is a precious achievement that we must support and nurture. There is no turning back.”

“Difficult as it may sometimes be, international cooperation remains the path to a more peaceful and prosperous world,” he said, pledging to continue to spare no effort to urge world leaders, long-standing or newly-minted, to recognize and embrace that preeminent 21st-century fact.

Ban stressed that journalists have an important job to do – informing the world about the work of UN – when it makes progress and when it falls short. “I deeply believe in your mission,” he said, underlining his efforts to be the defender of their safety and press freedom.

South Sudan has faced ongoing challenges since a political face-off between President Salva Kiir and his Vice-President Riek Machar erupted into full blown conflict in December 2013. The crisis has produced one of the world's worst displacement situations with immense suffering for civilians.

As the Syria crisis enters its sixth year, civilians continue to bear the brunt of a conflict marked by unparalleled suffering, destruction and disregard for human life. According to the UN Office for the Coordination of Humanitarian Affairs (OCHA), 13.5 million people require humanitarian assistance, including 4.9 million people in need trapped in besieged and hard-to-reach areas, where they are exposed to grave protection threats.