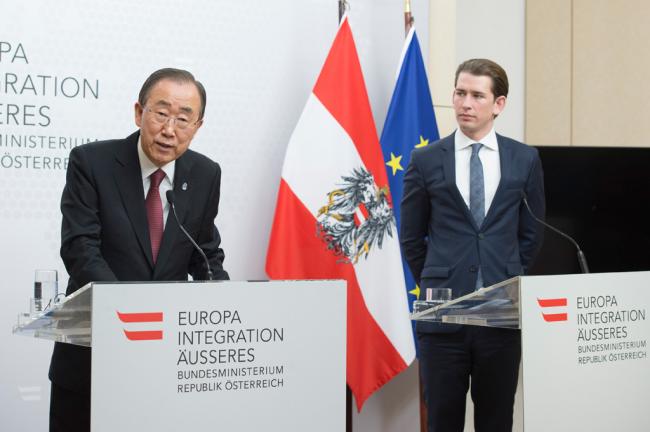 
Offering congratulations to Alexander Van der Bellen, member of Austria's Green Party and winner of this past weekend's presidential election, Ban reaffirmed the commitment of the United Nations to working with Austria and praised the country's efforts to achieve shared values and goals.

“I am happy to conclude my mandate as Secretary-General by visiting this great country, which I always regard as my second home,” announced Ban, who was first posted as the country's Korean ambassador in Vienna in 1998.

“I feel like an 'echter Wiener' [genuine Viennese],” he said.

The Secretary-General met on Wednesday with President-elect Alexander Van der Bellen over a lunch hosted by Sebastian Kurz, Foreign Minister for Foreign Affairs and Integration and then later in the afternoon with Christian Kern, the incumbent Chancellor.

Ban said that during his meeting with Minister Kurz, they discussed the 2030 Agenda for Sustainable Development, the Paris Agreement on climate change, the New York Declaration on refugees and migrants, and recent developments in Syria, the Western Balkans, and Ukraine.

“Austria's chairmanship of the Organization for Security and Cooperation in Europe (OSCE) next year is an opportunity to reinforce international cooperation and the partnership between the United Nations and the OSCE,” he announced to the press.

In response to a question about the country's role in preserving European stability, the Secretary-General referenced the country's important diplomatic and political roles as well as its continuation as a locale for ongoing international cooperation.

A member of Austrian Public Television also questioned him on Aleppo, both on best case scenarios and for confirmation of Russia's assertions about having created safe humanitarian corridors out of the city.

Ban acknowledged regret at being unable to arrive at an inclusive political solution over the past six years, and its impact on the UN's ability to provide humanitarian aid to the people of Aleppo.

“We have been really trying to provide life-saving, life sustaining, humanitarian support to many people who have been stranded, who have been kept in the besieged areas or hard to reach areas,” he said.