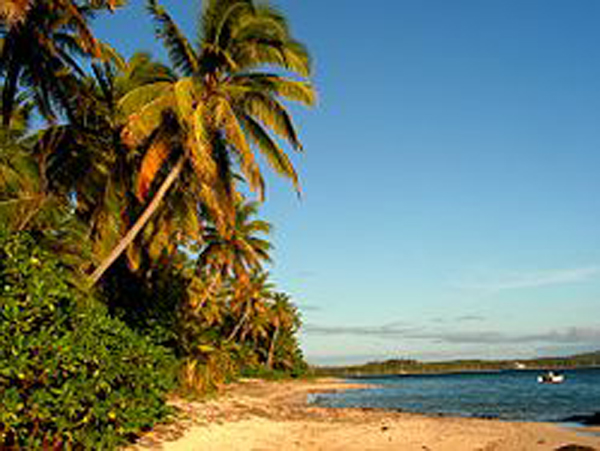 Fiji: A darker side of paradise, says Amnesty International

Famed for white-sand beaches and sweeping views of turquoise water, Fiji is known as a holiday destination. But a decade after the 2006 coup, the military remains in control of key institutions, including the police, with a militarization of the justice system that allows torture and other ill-treatment to go unpunished.

The new Amnesty International report, Beating Justice: How Fiji’s Security Forces Get Away with Torturedetails how uniformed officials on Fiji’s islands have inflicted severe beatings, rape and other sexual violence, attacks by police dogs, shootings and other forms of torture and ill-treatment or punishment in violation international law.

“Torture does not just humiliate the victim. It also debases the torturer by hollowing out their humanity. If Fiji wants to preserve its reputation as a Pacific island nation renowned for its natural beauty, it must end the ugly practices of its security officials,” said Kate Schuetze, Amnesty International’s Pacific Researcher.

“Not only do the security forces know that torture is taking place, they have stood in the way of accountability. While the Fijian authorities have ratified the UN Convention Against Torture and pledged to end this cruel practice, this will remain an empty gesture until decisive action is taken.”

The report is published just weeks after two prominent cases of police torture came to light, in October 2016, and on the eve of the tenth anniversary of the military coup that brought Prime Minister Voreqe “Frank” Bainimarama to power.

In an October 2016 speech, Prime Minister Frank Bainimarama said that the culture of “what we call the buturaki – the beating – is deeply ingrained in parts of the Fijian psyche”.

Beatings are among the most common form of torture and other ill-treatment used by the Fijian security forces, especially against suspected criminals and prisoners who have escaped.

The report details five cases where people were beaten to death, succumbing to injuries sustained while in custody.

Among the cases detailed in the report is that of Vilikesa Soko, a 30-year-old man and father of three, who was beaten, raped and killed in August 2014. Vilikesa Soko was a suspect in a robbery. After his arrest, he was interrogated, tortured and hospitalized for serious injuries.

Four days into his ordeal, Vilikesa Soko died of a blood clot in his lung, caused by multiple traumatic injuries, including to his rectum and penis, according to an autopsy report that was leaked online.

In January 2007, two people died from injuries after they were beaten by military officers. In both cases, the perpetrators evaded justice, being released within a month of being sentenced – serving only a fraction of the four-year sentences imposed.

Sakiusa Rabaka, one of the victims mentioned in the report, was just 19-years-old when he was severely beaten, sexually assaulted, and forced to perform military exercises while in custody at the Black Rock military base in the town of Nadi.

Eight police officers and one military officer were charged with Sakiusa Rabaka’s manslaughter. The military, however, stepped in to thwart accountability, by trying to send the accused military officer overseas on a UN Peacekeeping mission.

In 2009, the officers were tried and convicted. But just a month into their four-year sentences, the Prisons Commissioner released them early.

Coerced confessions and threats
Threats and violence have also been used to intimidate people and coerce confessions. In a series of cases highlighted in the report, the courts found the accused had been forced to sign confessions after being tortured by the police.

When called by prosecutors, police witnesses said the accused were lying. But upon further scrutiny, judges ruled the confessions inadmissible, finding evidence that they had been coerced. Nevertheless, there remains a risk that people who complain about being tortured are not believed and coerced confessions could be admitted into evidence.

In one case, five men accused of robbing a shop in Nadi had crushed chilies rubbed on their bodies, water poured in their ears, large rocks dropped on their backs and were beaten until they confessed.

Lawyers who represent torture survivors have also come under attack. Aman Singh, a lawyer for an internet café owner Rajneel Singh, has seen his client attacked in his home this year, by two unknown men who tried to strangle him and fired a gunshot at him.

Since he took up the case, Aman Singh, who is an outspoken critic of the government, his office has been broken into twice while his associates have been mysteriously attacked.

“I will stick by my men”
Under Fiji’s current constitution, government actions between 2006 and 2014 are covered by immunity. As Beating Justice details, this has led to a climate of near-impunity, where security officials can escape justice for serious human rights violations.

Details of torture have often been suppressed by the authorities, only to come to light after videos and autopsy reports have been leaked online. In the face of these reports, the government has not only refused to condemn the torture that took place, but in some cases, have offered the security officials its unequivocal support.

“At the end of the day, I will stick by my men, by the police officers or anyone else that might be named in this investigation,” Prime Minister and former Commander of the Royal Fiji Military Voreque “Frank” Bainimarama said in 2013.

"We cannot discard them just because they've done their duty in looking after the security of this nation and making sure we sleep peacefully at night."

Bainimarama’s remarks came in reaction to the leak on YouTube of a video showing uniformed officials beating and sexually assaulting a half-naked man in the back of a truck.

In the video, the man, Iowane Benedito, and another person were beaten after they escaped prison in late 2012. Despite the wide attention that the video attracted, two years passed before an investigation was opened into the torture it revealed.

In other cases, accountability for torture and other ill-treatment by the security forces has been obstructed. In some cases, complaints were not robustly investigated. The military has also directly intervened to protect its officers, or allowed them to return to their roles after they were convicted of serious offences.

Most egregiously, constitutional immunities bar investigations and prosecutions in cases of torture and other ill-treatment, including for crimes committed as recently as two years ago.

“In Fiji, accountability for torture is the exception rather than the rule. This amounts to a climate of near-impunity. It is the result of the fact that torture is poorly defined in law, immunity is granted, there are few legal safeguards, and there is no independent oversight,” said Kate Schuetze.

Towards a torture-free Fiji
Amnesty International’s report outlines a series of steps that Fiji’s authorities must take if they wish to fulfil their international obligations and rid the Pacific island nation of the scourge of torture and other ill-treatment.

The report calls on the Fijian authorities to ensure that there is independent oversight, the legal framework is reformed, and security officials responsible for torture are brought to justice.

“To rid Fiji of torture, the authorities should withdraw the armed forces from policing tasks and the military should not be above the law,” said Kate Schuetze.