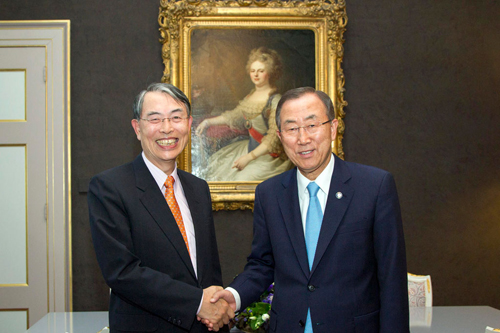 “Accountability for serious crimes of international concern is central to our global commitment to peace, security, human rights and fundamental freedoms,”  Ban said in his message for International Criminal Justice Day.

The Day is dedicated to celebrating the development and achievements of international criminal justice institutions. It is observed on 17 July, the date on which the Rome Statute was adopted in 1998.

In his message,  Ban highlighted that on Thursday also celebrates 10 years of a relationship agreement between the United Nations and the ICC, which is based in The Hague.

“The Relationship Agreement between the United Nations and the Court is founded in a shared belief that the cause of peace can only be served if those responsible for the most serious crimes of international concern are prosecuted and brought to justice,”  Ban noted.

He called the ICC “the centerpiece of our system of international criminal justice” but also noted that it is “a court of last resort” given the UN’s efforts to assist governments to better address impunity at the national level.

The President of the ICC, Judge Sang-Hyun Song, similarly noted that the core of the Rome Statute system is the responsibility of States to themselves investigate and prosecute “where the law is sovereign and respected and where justice for all is recognized as being crucial for peace, stability and development worldwide.”

He added that the Court’s intervention has galvanized more international attention to communities affected by crimes and the efforts essential to aiding the survivors.

“However, we are all conscious of the limits of the ICC’s current jurisdiction, which have to be remedied by continued progress towards universal ratification of the Rome Statute,” Judge Song stated.

In a letter to Judge Song, the Presidents of the International Criminal Tribunals for the former Yugoslavia (ICTY) and Rwanda (ICTR), Theodor Meron and Vagn Joensen, respectively, said that on Thursday offers an opportunity to reflect on achievements of international criminal justice in the last 20 years.

The establishment of the ICC, ad hoc international courts and the hybrid criminal courts has “helped to transform the political and legal landscape,” they said in a letter of congratulations.

They added that “calling senior political and military leaders to account for their acts before courts of law is increasingly the expectation, rather than the exception.”

The letter also noted that the Day serves as a reminder that there is still work to be done at both national and international levels “to bring an end to impunity and, more importantly, to prevent the commission of war crimes, crimes against humanity, and genocide in the first place.”