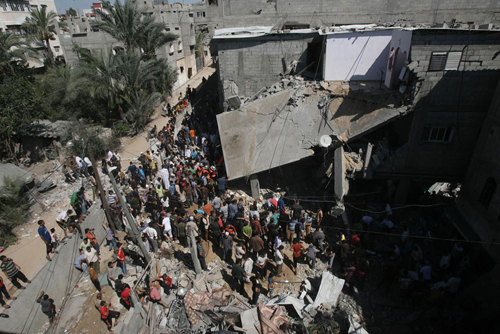 There can be no military solution, Ban says as Israel launches ground offensive against Gaza

India Blooms News Service | | 18 Jul 2014, 12:30 pm
#Gaza
New York, July 18 (IBNS): UN Secretary-General Ban Ki-moon on Thursday voiced his regret that Israel has launched a ground offensive against Gaza, despite calls for restraint, and stressed that there can be no military solution to the conflict which flared up over a week ago.

“I regret that despite my repeated urgings, and those of many regional and world leaders together, an already dangerous conflict has now escalated even further,” he stated during a photo-op at United Nations Headquarters with his newly appointed special envoys for Syria.

“In the past 24 hours, there have been a number of incidents involving the deaths of civilians, including the appalling killing of four boys on a beach in Gaza City,” he stated.

“I urge Israel to do far more to stop civilian casualties. There can be no military solution to this conflict. This applies as much to Israel-Palestine as it does to Syria.”

Israeli-Palestinian violence has flared in the wake of the recent kidnapping and murder of three Israeli teenagers in the West Bank and the subsequent kidnapping and killing of a Palestinian teenager from East Jerusalem. Militants in Gaza have since stepped up rocket attacks against Israel, and Israeli airstrikes on the enclave intensified.

Earlier on Thursday,  Ban had welcomed the humanitarian pause in Gaza which allowed the UN food agency and partners to provide aid to thousands of people, while expressing his hope that this will lead to a more durable calm.

In a statement issued on Thursday by his spokesperson,  Ban said the temporary ceasefire, which was brokered by the UN Special Coordinator for the Middle East Peace Process, Robert Serry, “allowed people to resume some daily routines and start repairs to electrical and water infrastructure,” while civilians in Israel “had a reprieve from rocket fire.”

The five-hour humanitarian pause started at 10 a.m. local time on Thursday and ended at 3 p.m.

The UN chief voiced appreciation that the pause “has mostly been respected by all parties,” and added that it shows that a cessation of hostilities is possible “if all the parties demonstrate the necessary will and put the interests of civilians, who have borne the brunt of this escalation, first.”

He voiced support for international efforts, led by Egypt, for a sustainable ceasefire, and expressed hope that on Thursday’s humanitarian pause can lead to a “more durable calm.”

The UN World Food Programme (WFP) is distributing emergency food vouchers in areas where shops are functioning so that people can get food and shops can get funds at a time when banks in Gaza are closed.

The agency said it took advantage of the humanitarian pause to transport food, including wheat flour, bread and canned tuna, from its warehouses ready for distribution to 85,000 people in the next days as security conditions permit.

“The food needs in Gaza are urgent,” said WFP Country Director Pablo Recalde. “We are seeing the effectiveness of WFP’s food assistance programmes, which provides the opportunity for a rapid response and flexibility to scale-up emergency food assistance if the need arises.”

Since the latest wave of fighting began, the agency provided emergency food rations and vouchers to more than 20,000 displaced people. It has appealed for $20 million to continue its food assistance programmes to more than 600,000 of the most vulnerable people in the area.

A large crowd gathers in front of a home that was destroyed during Israeli air strikes in the city of Khan Yunis in the southern Gaza Strip (8 July 2014). Repeated air strikes have destroyed many homes during the recent escalation of violence. Photo: UNICEF/NYHQ2014-0899/El Baba