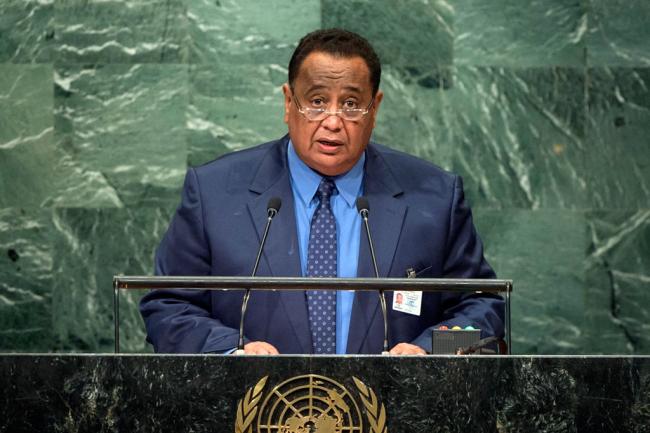 Sudan is committed to dialogue and will â€˜knock on every door in pursuit of peace,â€™ Minister tells UN

India Blooms News Service | | 25 Sep 2016, 10:24 am
#Sudan, # committed to dialogue, # peace, # UN
New York, Sept 25 (Just Earth News): In his address to the General Assembly on Saturday, Ibrahim Ahmed Abd al-Aziz Ghandour, the Minister for Foreign Affairs of Sudan, said the 2030 Agenda and other frameworks before the United Nations are vital for all countries and he hopes that calls for reform will be heeded so the Organization becomes a true platform for implementing principles of international legality and â€œa bulwark for justice.â€


He reaffirmed his Government’s unswerving commitment to the UN Charter and dialogue within the international community on such issues as international justice and the fight against impunity through mechanisms that are not selective and not politicized. “In our eyes, it is clear that the Rome Statute, which created the International Criminal Court,” rather than dispensing justice, hampers efforts to achieve peace.

“One has to differentiate between justice and politicization of justice,” he said, stressing that achieving peace requires cooperation and hard work. “We are going to knock on every door” in pursuit peace, he said, adding that dialogue is the only solution.

In that light, Sudan is on Saturday strengthening its social fabric and rebuilding the country. “Thanks to God, the Government and the people of my country, Darfur has become a safe region, where peace and security prevail,” and which UN has witnessed, he noted.

His Government reiterates its call for the withdrawal of the African Union-UN Hybrid Operation in Darfur (UNAMID). “There are no more reasons for its presence,” he said, adding that its forces could be better employed elsewhere to ensure that the served to consolidate peace in other parts of the world.

He also called for the removal of sanctions against his country and the writing off of its billions of dollars in foreign debt, which was hampering Sudan’s economic capabilities and ability to achieve the Sustainable Development Goals.