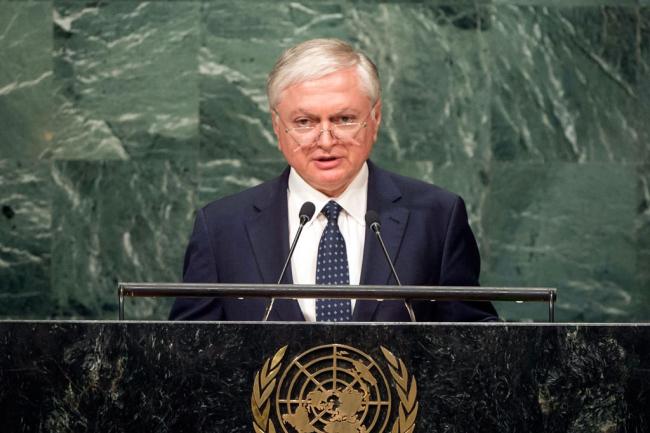 
“We must admit that thus far, the situation in Syria is a failure of the international community,” Belgium’s Charles Michel said in his address to the General Assembly’s annual general debate, referring to Syria as a country of “blood and war” and “unspeakable suffering,” and which is driving countless people to seek refuge elsewhere.

“We cannot allow this chaos to serve geo-strategic interests, which are in fact, greatly removed from the Syrians and their future,” he said, adding: “Neither can we allow the bloodthirsty stubbornness of a single man be an obstacle to a political solution and peace. He said that Belgium supported the efforts of the UN Special Envoy for Syria, Staffan de Mistura, and called on all permanent members of the UN Security Council to assume their responsibility in ending the conflict.

He went on to note that Da’esh [also known as the Islamic State of Iraq and the Levant, or ISIL], as well as Boko Haram, Al-Qaida and other terrorist groups were driving “a new era” of barbarism and fanaticism. “My country, like many others, has been hit, tragically, in March,” he recalled, declaring that the war against terrorism must be persistent and comprehensive.

In his Plan of Action to Prevent Violent Extremism, Xavier Bettel, the Prime Minister of Luxembourg, said the Syria’s Government is perpetrating atrocities, while Da’esh and other groups commit equally “abominable crimes” and flourish from the war economy and external support. A generation of children has been traumatized, deprived of protection and education, he said, calling for perpetrators of war crimes and crimes against humanity to be brought to justice, including before the International Criminal Court (ICC).

“The toll is terrible,” he continued, noting that the UN estimates that some 300,000 people have been killed in the conflict, while there have also been reports of chemical warfare and humanitarian convoys are being deliberately targeted. He called on Syrian authorities to ensure safe an unhindered access to all people in the country. While he hailed the repeated efforts of the United States and Russia to secure a ceasefire, the deal has proved fragile and must be fully enforced.

Calling for a resolution of the conflict that meets the legitimate aspirations of the Syrian people, Bettel said the UN must play a determining role in facilitating negotiations among the Syrian parties to bring about a lasting solution.

This is a cornerstone of Swedish security policy, she said, adding that this is her country’s basic approach to security, both in the region and farther afield. “Indeed, the importance of cooperation increases with the transboundary nature of threats. Internal and external security are more interlinked than ever before,” and as such, the international community must improve its common tools for crisis management.

“Equip the next generation of peace operations with more robust mandates and proper resources. Strengthen cooperation between UN and regional organisations, including the European Union and the African Union. But we cannot ignore the key to achieving peace: political will. Leaders have a huge responsibility to turn the tide and realize the benefits of peace,” she said.