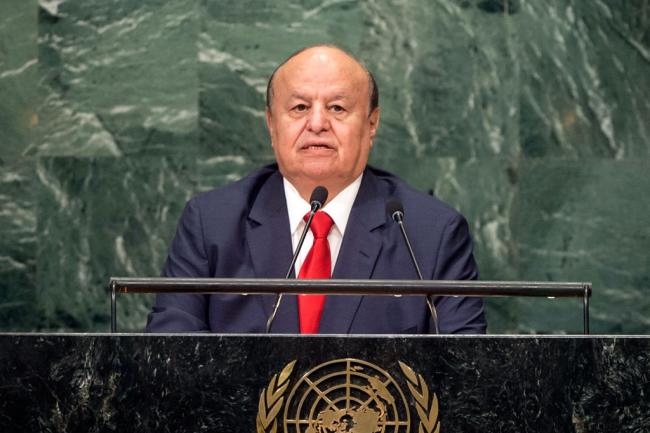 India Blooms News Service | | 24 Sep 2016, 08:41 am
#peace process, # Yemen , # President Abdrabuh Mansour Hadi Mansour, # UN
New York, Sept 24 (Just Earth News): Thanking the United Nations Secretary-General and Special Envoy for all the efforts they have undertaken to ensure the peace process in Yemen and â€œbreak out of the suffocating crisisâ€ that is plaguing his country, President Abdrabuh Mansour Hadi Mansour told the General Assembly on Friday that with international support, a â€œnew Yemenâ€ will emerge from the ruins of war.


He recalled that at this time last year, he had come to New York for the general debate directly from the port city of Aden, then Yemen’s interim capital, and had citied the promise of the return to legitimacy months after a coup against State institutions by Houthi militias had plunged Yemen in to a “meaningless war,” that ripped apart its social fabric and wrecked its economic, financial and infrastructure assets.

“On Friday, I speak to you as the State leadership that runs the country, despite all the challenges, with [the Government] in full force,” operating the liberated Governorates, he said, stressing that: “The destructive scheme led by Iran through its mercenaries in Yemen stands no chance of succeeding.” He recalled that in the war, “we did not fire the first shot […] and we have long called for putting an end to all the tragedies that have destroyed [out country] for the last 50 years as a result of corrupt governments and selfish control of national wealth and State power” and side-lining of certain parts of the country.

Mansour said all this had led to the eruption of tension and the popular protests in the country two years ago, and then, as now, “Iran impeded all measures that we are taking” to implement UN resolutions and the initiatives set out by the Gulf Cooperation Council.

“On Friday, we are enduring the outcome of the reckless practices of [the Houthi militias], which have turned everything upside down,” he stressed, and added that even after pressing ahead with a legitimate transition that had led, among others, to the drafting of a new federal constitution, the coup leaders stepped up their attacks against the State. “This war is not our choice. It was imposed,” he declared.

“We are not advocates of revenge. Rather we would extend our hand towards the building of a new Yemen, despite all the damage wrought by the coup enterprise. We continue to see [the coup alliance] as Yemenis and we cannot confiscate their right to a better future,” he said, stressing that he aim of the Government is to secure a better way of life for all Yemenis.

The Government has called on the rebels to demonstrate their loyalty to their homeland more than once, he said, stressing that the peaceful future the Government seeks for Yemen will not stand for militias and “sectarian gangs” exercising control over State assets or terrorizing the country and the wider region Gulf region. Armed militias must withdraw and surrender their weapons and control of agencies, and then complete the political process by endorsing the new draft constitution and moving on to elections.

Denouncing the spread of terrorism in Yemen and the regions, which he said is sponsored by Iran, President Mansour urged stepped up measures to eradicate the scourge, which continued to plague the country. The Houthi coup d’état had left a security vacuum, economic collapse and extreme poverty. The militias had recruited children, besieged cities and waged a meaningless war against the Yemeni people, whose suffering had reached unbelievable levels with regard to health, education and other services.

“We might fail to pay the salaries of people working in public service,” he said, calling for support from the “free world” and its financial institutions. Acknowledging the catastrophic situation in Yemen, he renewed his call on all donor countries to fulfil their pledges to ensure desperately-need humanitarian aid reaches all governorates and to end the suffering of the Yemeni people. The country would emerge from the ruins with international support, and the Government would not stop until the militias were defeated, he vowed.