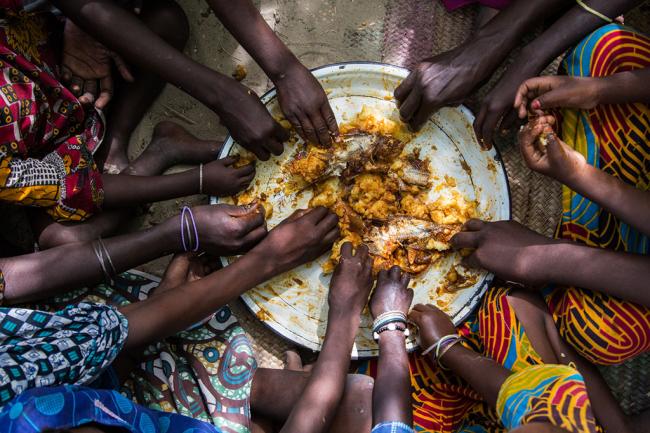 India Blooms News Service | | 23 Sep 2016, 09:03 am
#Agriculture, # food system transformation, # pathway to zero hunger, # Ban ki Moon
New York, Sept 23 (Just Earth News): While the world has seen some progress on combatting the root causes of hunger and malnutrition, the challenge of providing the fundamental right to adequate food to all people must remain a priority, United Nations Secretary-General Ban Ki-moon said on Thursday, urging Member States to continue to work together to tackle the problem.

“It is unacceptable in a world of plenty that nearly 800 million people still suffer from hunger,” the UN chief said at a high-level event on “Pathways to Zero Hunger” at UN Headquarters this afternoon.

“This represents a collective moral and political failure,” he added.

The event, co-organized by the UN Food and Agriculture Organization (FAO), the International Fund for Agricultural Development (IFAD) and the World Food Programme (WFP), seeks to galvanize momentum for the Zero Hunger Challenge launched by the Secretary-General in 2012.

The Zero Hunger Challenge reflects five elements from within the Sustainable Development Goals (SDGs), which, taken together, can end hunger, eliminate all forms of malnutrition, and build inclusive and sustainable food syste

At on Thursday’s event, the Secretary-General recalled that when he invited world leaders and development partners, through the Challenge, to share his vision of a world free from hunger and malnutrition within a generation, he challenged them to build a world where all people enjoy the fundamental right to adequate food, and a world where food systems are inclusive, resilient and sustainable.

“This vision now lies at the heart the Sustainable Development Goals,”  Ban emphasized. “With the 2030 Agenda we have the opportunity to silence once and for all the deafening cry of hunger and malnutrition that has echoed down through history.”

Noting that the pledge of the SDGs is to “leave no one behind,” the Secretary-General said that the common goal is to transform agriculture and food systems to drive rural prosperity and end poverty; to put agriculture at the heart of the solution to climate change; and to build peaceful societies through food security.

“By tackling the root causes of hunger and malnutrition we can support all the SDGs,” he said.

The UN chief highlighted that he has seen “real progress” in the past four years, citing that the global population of undernourished people has fallen by nearly 70 million since 2012.

In addition, he said that tackling the problem of food waste has become a “global cause,” while sustainable agriculture and food systems are at the heart of the Paris Agreement on climate change and Member States have now committed to ‘Zero Hunger’ as part of the 2030 Agenda.

“The Zero Hunger Challenge will continue to offer a space for diverse partners to come together behind a common objective,”  Ban said. “As I end my term in office, I am asking FAO, WFP and IFAD to take my challenge forward.”

“I am confident that they will not rest until zero hunger is a reality. Together, we can meet the challenge of securing a future of health, prosperity, dignity and opportunity for all on a healthy planet,” he concluded.