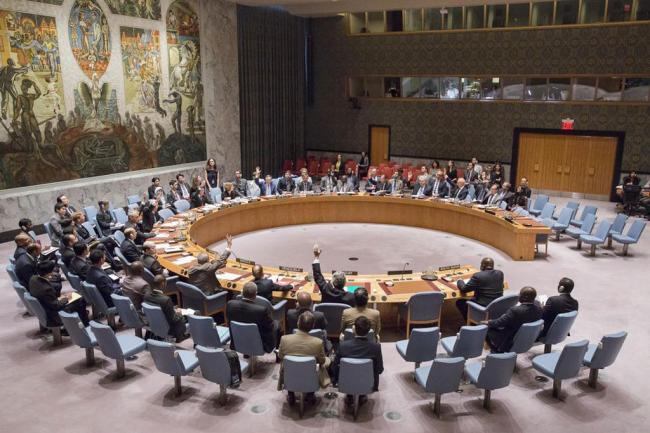 Reiterating its “grave alarm and concern” at the political, security, economic, and humanitarian crisis in South Sudan, the Security Council adopted, by a recorded vote of 11 in favour, with four abstentions (China, Egypt, Russian Federation and Venezuela), a new resolution extending the UN Mission until 15 December 2016, and authorizing during the same period a Regional Protection Force, which will report to the overall UNMISS Force Commander and “be based in Juba, with the responsibility of providing a secure environment in and around Juba.”

The Council’s move to strengthen UNMISS comes just days before South Sudan marks the one year anniversary of an August 2015 peace accord meant to end the fighting that had erupted two years earlier, and in the wake of recent clashes between rival forces – the Sudan People's Liberation Army (SPLA) loyal to President Salva Kiir and the SPLA in Opposition backing First Vice-President Riek Machar – that broke out in and around the capital, Juba, on 7 July, close to the fifth anniversary of the country's independence.

UN compounds and UNMISS-managed civilian protection sites were attacked during the fighting and, according to the UN High Commissioner for Human Rights, Zeid Ra'ad Al Hussein, a preliminary UN investigation into the violence and its aftermath revealed that Government security forces carried out killings and rapes, and looted and destroyed properties.

Just two days ago, UN Emergency Relief Coordinator Stephen O’Brien, who recently visited the country, reported that the humanitarian situation has witnessed significant deterioration, including in areas that were once relatively stable. Since December 2013, over two million people have fled their homes. Some 1.6 million are displaced within South Sudan and more than 900,000 people have fled to neighbouring countries.

The resolution adopted by the Security Council on Friday strongly condemned the fighting in Juba, including attacks against civilians, UN personnel, premises and property, and requested the Secretary-General to expedite investigation into the incidents. The text further expressed “deep concern at the tense and fragile security situation in the rest of the country,” including armed clashes and violence involving the SPLA and SPLA-In Opposition (SPLA-IO), and armed groups.

Reminding all parties of the civilian character of protection of civilians sites in South Sudan, and recalling its resolution 2206 (2015), which states in part that those who engage in attacks against United Nations missions, international security presences, or other peacekeeping operations, or humanitarian personnel may be subject to sanctions, the Council went on to condemn all violence and human rights violations throughout the country, as well as obstruction of the work of UNMISS.

The adoption of the resolution takes note of the decisions adopted by the Intergovernmental Authority on Development (IGAD) Plus Heads of State and Government in their 16 July 2016 Communique for deployment of a ‘regional protection force, and the 5 August 2016 Communique of the Second IGAD Plus Extra-Ordinary Summit on the Situation in South Sudan which notes the Transitional Government of National Unity’s consent to deployment of such a force in principle.

By the resolution, the Council decided that while the protection force would be based in Juba, and would support of the outcomes of the Permanent Ceasefire and Transitional Security Arrangements Workshop, and in extreme cases, in other parts of South Sudan as necessary. It also stressed that the Regional Protection Force will carry out its mandate impartially and in strict compliance with international law, including, as applicable, international humanitarian law.

Emphasizing that protection of civilians must be given priority in decisions about the use of available capacity and resources within the mission, the Council, which raised the mission’s troop ceiling form 12,000 to 17,000, also stressed that UNMISS’s mandate includes authority “to use all necessary means to protect United Nations personnel, installations and equipment to deter violence, especially through proactive deployment and active patrolling, to protect civilians from threats, regardless of source.”