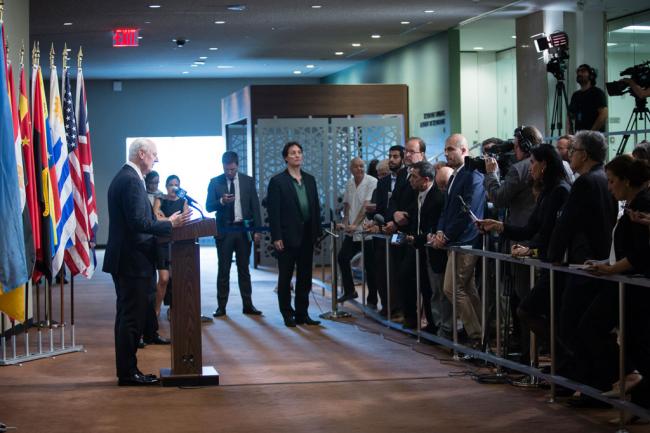 India Blooms News Service | | 30 Jun 2016, 06:36 am
#Syrian , # UN, #peace talks
New York, June 30 (Just Earth News):The United Nations envoy mediating a resolution to the crisis in Syria on Wednesday said that the next round of the intra-Syrian talks must be well prepared to ensure the possibility of moving forward with the decisive outcome of a political transition in August.

“Bottom line, I’m still aiming – we are aiming at – within July, but not at any cost and not without guarantees,” Staffan de Mistura, the UN Special Envoy for Syria, told the press at the conclusion of closed consultations with the Security Council in New York.

de Mistura continued that he was “aiming at August as the period where we should be seeing something concrete. So that in September we take stock.”

He noted that there was “a lot of discrete diplomacy taking place” given his recent visit to St. Petersburg, Russia, and tomorrow’s visit to Washington, D.C.

“Everyone agrees that political transition is a priority and no one is denying it,” he stressed, adding “so let’s talk about it in August.”

The Special Envoy acknowledged that the first two rounds of the talks had produced some “astonishing outcomes,” including commonalities between the parties, “but this time, the third one needs to be particularly well prepared.”

“In other words, we learned that when you convene a conference or talks or intra-Syrian talks, you want to make sure that it has good chances of success. Having just a conference for the sake of a conference, we can do that any time but that’s not the purpose,” he added, noting that one of the UN strengths was its “convening power.”

The Special Envoy also noted that, during on Wednesday’s consultations in the Council, another point that was brought up was that humanitarian aid reached the two remaining besieged areas in Syria through cross-line operations and airdrops.

“It’s quite a landmark. It’s not enough. We’re not reaching them as much as we want. We are not reaching everywhere but if you think about what was last year [compared to] on Wednesday, 18 of the 18 towns besieged were reached,” he said.

Earlier in the day, an inter-agency humanitarian convoy delivered assistance to the besieged towns of Arbin and Zamalka in rural Damascus. The convoy included water, sanitation and hygiene items, as well as food, nutrition, education, health and other emergency supplies for 20,000 Syrian men, women and children in need.

This is the first time an inter-agency convoy has reached Arbin and Zamalka since November 2012.

“Access cannot just be provided once. We continue to call for sustained access to these locations,” Farhan Haq, UN Deputy Spokesperson, told reporters in New York.

Aid was also delivered on Wednesday to Western Harasta City, a northern suburb of Damascus, for the first time since November 2014.

An inter-agency convoy delivered assistance, including food, water, sanitation and hygiene items, nutrition, education, health and other emergency supplies for 12,500 people, according to the UN spokesperson.

Upon completion of on Wednesday’s convoys, since the start of 2016, more than 941,000 people – including more than 354,000 people in all besieged locations – have been reached with assistance through inter-agency operations, many of them more than once..