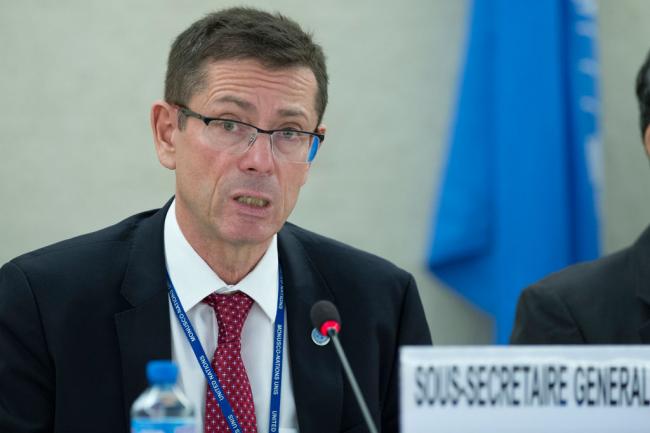 Addressing the Human Rights Council in Geneva, Ivan ŠimonoviÄ‡, the Assistant Secretary-General for Human Rights, appealed to the leaders of the warring sides to respect a ceasefire agreement and said he was people he had met on both sides of the front lines.

“I have heard them loud and clear: they want peace, human rights and the rule of law,” he said.

The conflict has claimed the lives of nearly 9,500 people since fighting erupted two years ago – more than one in four civilians – and left nearly 22,000 people injured.

While the rate of casualties has slowed substantially since a ceasefire in September 2015 and the signing of the Minsk Peace Accords – an agreement signed under the auspices of the Organization for Security and Co-operation in Europe (OSCE) to halt fighting in the Donbass region of Ukraine – some 10 people are killed each month.

These dire figures are part of the latest report from the Office of the UN High Commissioner for Human Rights (OHCHR) covering the period between 16 February and 15 May 2016.

It notes that since 15 May, half of all civilian casualties were caused by shelling from mortars and howitzers – weapons which use in the conflict zone are prohibited by the Minsk Agreements.

Mr ŠimonoviÄ‡ said that clashes and exchange of fire happened “on a daily basis” near Donetsk and Horlivka – cities controlled by the armed groups – and in the towns of Avdiivka and Mariinka, which are under Government protection.

Those living on either side of the contact zone also face severe restrictions on their freedom of movement, the UN official said, in reference to the 20,000-30,000 people who cross the front line every day to get their pensions or see a doctor.

He also voiced concerns about hundreds of people still missing in Government and rebel-held areas in the east, and reported human rights violations in the Crimea. Minorities there, such as the Tatars, have seen their situation deteriorate considerably in the two years since the Russian Federation extended its control over the peninsula.

“Anti-extremism and anti-terrorism laws have been used to criminalize non-violent behaviour and stifle dissenting opinion, while the judicial and law enforcement systems have been instrumentalized to clamp down on opposition voices,” he said. “Worst affected are Crimean Tatars, whose main representatives body, Mejlis, has been banned, and whose representatives I met during my visit.”

In addition, accounts of torture and ill-treatment, arbitrary and incommunicado detention by the armed groups have continued to surface in the conflict zone, where 2.7 million people live.

Those responsible “will be held to account sooner or later,”  ŠimonoviÄ‡ said, before adding that war crimes, crimes against humanity and grave breaches of human rights cannot be the subject of any amnesty.

Also on Wednesday, the Human Rights Council heard directly from the UN High Commissioner for Human Rights, Zeid Ra’ad Al Hussein, who presented on the status of human rights in Burundi.

He detailed a “tragic and comprehensive” deterioration of human rights of the people of Burundi during the year following the political crisis of April 2015, according to the Council.

The perpetrators of human rights violations and abuses, including extra-judicial executions, enforced disappearance, arbitrary arrest and torture, were members of the security and intelligence forces, members of an armed element connected to the Imbonerakure, which itself was associated with the governing party, as well as other armed groups and individuals.

“Almost 270,000 people fled the country and a further 100,000 were internally displaced,” he said, adding that the economy was in free-fall, squandering the development gains made during eight years of sustained growth.

The situations in Ukraine and Burundi are among the countries currently on the agenda of the Human Rights Council , whose session started on 13 June and will last through this Friday.