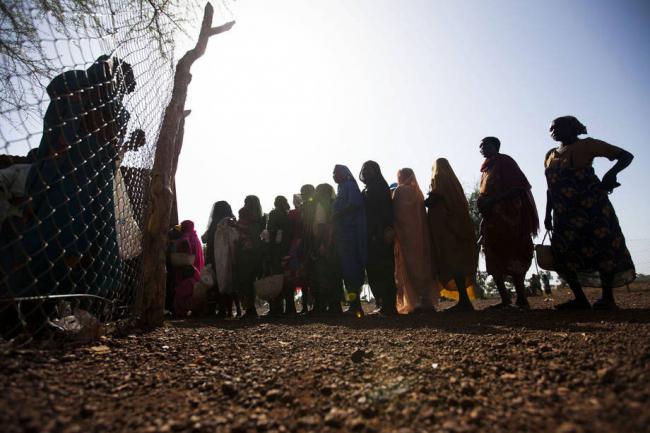 India Blooms News Service | | 29 Jun 2016, 11:09 pm
#hunger catastrophe, #UN , #South Sudan
New York, June 29 (Just Earth News): The level of food insecurity in South Sudan is at the highest since the start of the conflict two and a half years ago, United Nations agencies On Wednesday warned.


“Up to 4.8 million people in South Sudan – well over one-third of the population – will be facing severe food shortages over the coming months and the risk of a hunger catastrophe continues to threaten parts of the country,” according to a statement from the Food and Agriculture Organization (FAO), the United Nations Children’s Fund (UNICEF) and the World Food Programme (WFP).

The figure does not include some 350,000 displaced people seeking refuge at UN Protection of Civilians areas or other camps, who are entirely dependent on humanitarian assistance.

The figure comes from an Integrated Food Security Phase Classification update released On Wednesday by the Government, the three UN agencies and humanitarian partners. It is an upgrade to the previous number from April of 4.3 million people who were projected to be in urgent need of food, agriculture and nutrition.

“The deteriorating situation coincides with an unusually long and harsh annual lean season, when families have depleted their food stocks and new harvests are not expected until August,” the UN agencies said in the statement. “The level of food insecurity this year is unprecedented.”

The UN officials have said they are very worried about the food insecurity spreading beyond areas of conflict, as rising prices, impassable roads and dysfunctional markets prevent families from accessing food. Sharp spikes are being seen in Eastern Equatoria or Western Bahr el-Ghazal, whose capital, Wau, was the site of recent fighting recent fighting which uprooted tens of thousands of people.

Given the lack of access to food, child malnutrition is among the main concerns. More than 100,000 children treated for severe malnutrition since the start of the year – an increase of 150 per cent since 2014, according to UNICEF.

The three UN agencies said despite the difficult circumstances, they would work with international and local non-governmental organizations to deliver life- and livelihood-saving support.