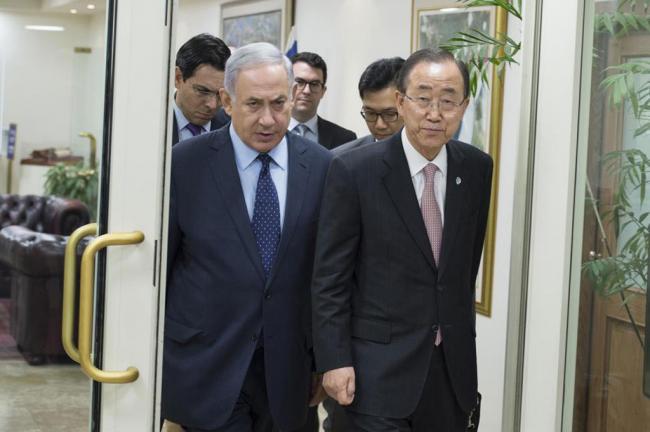 “No solution to the conflict will be possible without the recognition that both Palestinians and Jews have an undeniable historic and religious connection to this land,” the Secretary-General said at a joint press conference with  Netanyahu.

Noting that he was proud that, during his term as Secretary-General, cooperation between Israel and the UN has deepened in a variety of fields, including the promotion of the Sustainable Development Goals (SDGs),  Ban said he is also pleased that Israel has been expanding its presence and role in the UN over the past 10 years.

Underlying causes of violence must be addressed

Lamenting that his previous visit to Jerusalem in October last year took place during the peak of the recent wave of violence, the UN chief highlighted that the frequency of terror attacks and clashes have decreased.

“Yet we must not mistake short-term quiet for a long-term solution. We must not allow difficulties to become excuses for inaction,” he emphasized, indicating that the risk of renewed violence remains high, while attacks, such as the deadly shooting in Tel Aviv earlier this month, continue.

The Secretary-General stressed that security measures alone will not be enough to resolve the underlying causes of the cycles of violence that Israelis and Palestinians have been struggling with. Instead, he pointed to hope, as well as leadership that is committed to peace and a lasting solution, as necessary requirements for achieving peace.

“We cannot ignore key underlying causes of violence: growing Palestinian anger, the paralysis of the peace process, and nearly a half century of occupation. [None] of these causes justify terror. They can only be resolved through bold political action,” the UN chief said.

Ban highlighted that during his nearly 10 years as Secretary-General, he was proud to say that he had always been a committed friend of Israel, having worked hard to show his sincere friendship for the country. He also noted that his conversations with  Netanyahu had helped him understand Israel’s frustrations and fears.

“At the same time,  Prime Minister, I encourage you to take the courageous steps necessary to prevent a one-state reality of perpetual conflict that is incompatible with realizing the national aspirations of the Israeli and Palestinian people,”  Ban said.

“The international community can and must support all of these efforts,” he added. “I pledge my full commitment. This may be my last year as Secretary-General, but I will work until the last minute of my mandate for peace, security and justice and dignity for the people of Israel and Palestine.”

Earlier on Tuesday, the Secretary-General travelled to Gaza, where he visited a school run by the UN Relief and Works Agency for Palestine Refugees in the Near East (UNRWA). Speaking to the media following the visit, he reminded the international community of its “ongoing responsibility to act decisively for peace,” and urged Palestinian leaders to take responsibility for reconciliation.

Recalling his personal experience of seeing his own country, the Republic of Korea, recover from the devastation of war,  Ban said he knew what it is like to live as a displaced person on the move with no home.

“And I know what the United Nations can do to help. I stand with the people of Gaza to say that the United Nations will always be with you,” he said. “They are enduring enormously difficult living conditions. The closure of Gaza suffocates its people, stifles its economy and impedes reconstruction efforts. It is a collective punishment for which there must be accountability.”

Noting that some 70 per cent of the population is in need of humanitarian assistance, the UN chief also highlighted that more than half of Gaza’s youth have little to no job prospects or horizons of hope.

“This situation cannot continue. It feeds anger and despair. It increases the danger of a new escalation of hostilities, which can only bring further suffering to the people of Gaza,”  Ban said. “We need to speak openly of the challenges and the unacceptable difficulties that the people of Gaza face. Of the humiliation of the occupation and the closures, but also of the division between Gaza and the West Bank.”

“Palestine is one and until Gaza and the West Bank are united under a single, democratic and legitimate Palestinian government, based on the rule of law and the [Palestine Liberation Organization] PLO principles, Gaza’s prospects for full recovery will be limited,” he added.

The Secretary-General is expected to visit the West bank later on Tuesday.