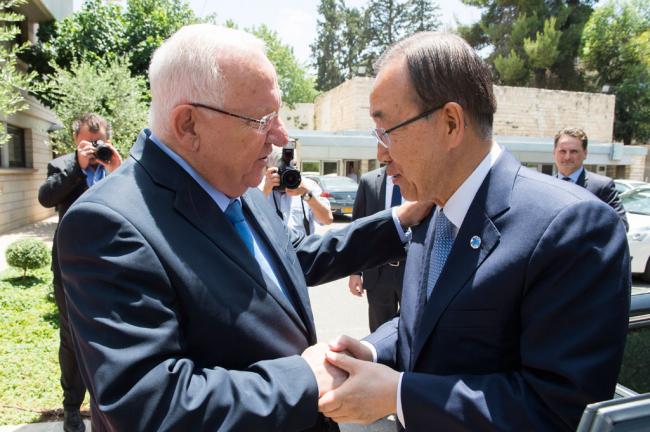 Citing the latest terror attack in Tel Aviv,  Ban also said that stabbings, shootings and bombings will not achieve anything because violence “is never a solution.”

“Such acts are precisely designed to breed fear and uncertainty. They eat away at trust and hope, drive Palestinians and Israelis farther apart, and strip away a sense of empathy for one another,” he said at a joint press encounter with the Israeli leader.

“I must be equally clear that nearly 50 years of occupation has had a devastating impact on Palestinian lives, undermining the belief in a peaceful resolution to this conflict,”  Ban added. “It also has not brought security for Israelis.”

Urging leaders on both sides to urgently take concrete steps to restore hope and a political horizon, the UN chief stressed that “a negotiated two-state solution remains the only viable option to prevent perpetual conflict and to achieve the legitimate aspirations of both peoples.”

The Secretary-General encouraged Israeli and Palestinian leaders to engage with the Middle East Quartet – made up of the European Union, Russia, the United States and the UN – which continues to work with the parties and the region to bring about the necessary conditions for the resumption of meaningful negotiations and is finalizing its first report on the impediments to the two-state solution and the way forward.

“ President, I count on your courage and leadership to take the bold actions that will establish a just, comprehensive and lasting peace for the people of Israel and Palestine,”  Ban said, addressing President Rivlin.”

In his remarks, the UN chief also welcomed on Monday’s announcement of the normalization of relations between Israel and Turkey. “This is an important and hopeful signal for the stability of the region,” he said.

Earlier in the day,  Ban spoke at Tel Aviv University, where he accepted the George S. Wise Medal, an award named after an American Jewish sociologist who served as the first president of the institution.

The UN chief noted that, over the past ten years as Secretary-General, he has witnessed countless examples of the power of science and technology to transform human lives.

“Our challenge is to harness the innovation taking place in the research labs of this campus and around the world to meet the challenges facing humanity – from tackling climate change and disease, to preventing cyber-crime, promoting food security and so much more,” he said.

Ban flagged that the biggest war being waged on Monday does not involve guns or tanks or fighter jets.

“The biggest confrontation is the battle for minds,” he said. “On the one hand, there are those who want to divide the world into ‘us and them.’ On the other, stand those who see humanity, in the words of the UN Charter, as ‘we the peoples.’”

Palestinian and Israeli leaders must stand firm against terror, violence and incitement, the UN chief added, stressing the need for innovative thinking and action to tear down the walls of mistrust.

“I urge the ‘start-up nation’ to help us all start up peace … start up understanding … start up reconciliation for a better world,” he said.

Ban also encouraged the students to be global citizens, who never forget that challenges know no borders, and highlighted that they are also citizens of the world, urging them to help achieve the goals set out in 2030 Agenda for Sustainable Development, which he described as “a blueprint for building a people-centred, planet-friendly future.”