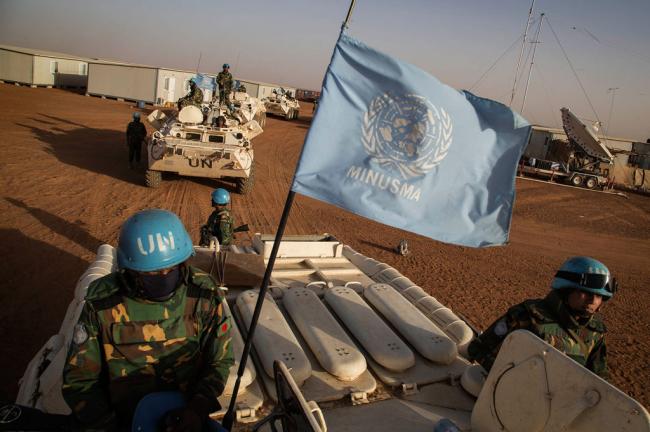 India Blooms News Service | | 30 May 2016, 07:45 am
#Mali, #UN Mission
New York, May 30 (Just Earth News): Five United Nations peacekeepers were killed in an ambush in central Mali earlier on Sunday, with another 'blue helmet' seriously injured, according to preliminary information reported by the country's UN mission, which deplored the â€œheinous act of terrorismâ€ as all the more shocking because it occurred on the day set aside for the global community to honour UN peacekeepers.


According to a press statement from the UN Multidimensional Integrated Stabilization Mission in Mali (MINUSMA), the ambush occurred at about 11:00 a.m. near the town of Sevaré. According to preliminary information, five peacekeepers were killed. Another was seriously injured and has been evacuated.

The Mission expressed its condolences to the families of victims, as well as to the Government and people of Mali, and wished a speedy recovery to the injured peacekeeper.

"I condemn in the strongest terms this despicable crime in addition to other terrorist acts that targeted our peacekeepers, which constitute crimes against humanity under international law," said Mahamat Saleh Annadif, the Special Representative of the UN Secretary General and head of MINUSMA.

"This heinous act of terrorism is even more shocking [as] it was perpetrated there during International Day of Peacekeepers," underscored,  Annadif, referring to the annual 29 May commemoration, declared by the UN General Assembly in 2003, paying tribute to the professionalism, dedication and courage of all the men and women serving in UN peacekeeping operations, and honour the memory of those who have lost their lives in the cause of peace.

Annadif urged that every effort be made to identify those responsible for these heinous crimes against friendly forces of Mali and the Malian Armed Forces, five of whom were also killed on Friday, 27 May.

Finally, he stressed that the MINUSMA is more committed than ever to pursue its mission in support of Mali and its people.