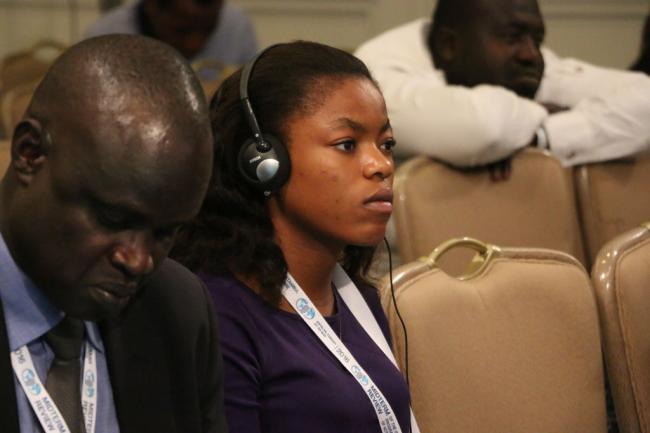 LDCs: With journalists sponsored from vulnerable nations, news on UN conference can reach all corners of globe

India Blooms News Service | | 29 May 2016, 06:53 am
#LDCs, # UN conference, # journalists, # vulnerable nations
New York, May 29 (Just Earth News): More than two dozen journalists from the world's least developed countries are in Antalya, Turkey, to report on a United Nations conference focused on the state of their homelands, and to ensure that key messages are disseminated as widely as possible thanks to their local news outlets.


Aminata Charlotte Seck, an editor for a monthly women's magazine in Senegal, said she was particularly interested to hear about the “impressive” statistics shared by Rwanda, regarding its progress made over the past five years.

“This brings a lot of hope,” she told the UN News Centre. “We have to tell this story so people know it's possible, it's not only a dream.”

The Midterm Review of the Istanbul Programme of Action (IPoA), which opened yesterday, is focused on assessing what least developed countries (LDCs) have achieved since the 10-year plan was adopted in 2011. It aims to give impetus to economic and social development in the 48 countries that currently meet the LDC criteria (IPoA), and thus receive special international support.

The three-day event, co-hosted by the United Nations and the Turkish Government, is underlining that while progress has been made in some of the LDCs, many still face significant challenges that need to be addressed at the national level with the support of donors.

The UN estimates that 51 per cent of the population of LDCs – almost 500 million people – still lives in extreme poverty; 18 million children of school age are not getting an education; and their exports only account for 1.1 per cent of the global total.

While many of the women and men journalists sponsored by Turkey to attend the conference are experts on these issues, many voiced that being in Antalya is an opportunity to learn more about other countries, especially those on different continents which they do not report on as much.

“This is a rare opportunity,” Koang Pal Chang, a South Sudanese reporter who works for Eye Radio – with a listenership of one million – enthusiastically highlighted.

“Some of the journalists have never heard of South Sudan. I've heard of all these countries, but I have never had a chance to meet their people face to face and to hear about their countries, what they are doing, to see how far they have gone and what are some things we share. For example, we share the situation of conflict in Somalia,” he said.

Chang added that being at the event means he can also tell the people of South Sudan what being an LDC means and about the way forward to try and reach some of the goals of the 10-year plan. South Sudan is the latest country to have joined the list in 2012, after becoming an independent nation in 2011.

“Currently the situation is bad in terms of fighting in most parts of the country, and most of the population is displaced either in UN camps or in neighboring countries.” he lamented.

Regarding South Sudan's indicators of progress, he said “the data is zero,” with nothing yet: “We were just starting to come out of war and then we went back to war. But for me, being here, it's an opportunity to learn from this review conference.”

Similarly, Maribel Ibule Djole, a writer for the Equatorial Guinean news outlet Ebano, said all the journalists coming from LDCs have been showing great solidarity and support to complete their work.

“I'm happy to be here alongside journalists like me from other places because we have the same objectives. We have been helping each other, whether we're from Africa or Asia, we all come from countries that experience challenges, and we have an important role to play. Together, we can succeed,” she insisted, adding how surprised she was at first to discover she would be coming to Turkey, a feeling that quickly turned to excitement.

One of the events on Saturday in Antalya included a press briefing, which Gyan Chandra Acharya, the UN High Representative for Least Developed Countries, Landlocked Developing Countries, and Small Island States, specifically organized for the journalists coming from LDCs.

Speaking to the UN News Centre after the briefing, he underlined that many of them came to the conference having little information about what an LDC was, despite their own countries being part of that group.

“I think that speaks for itself that there is a need for more awareness about this conference at the national level, as well as across all sectors. The journalists will be able to really take the messages from here to their countries,” he said.

“Another important part is that when they go back, they will be following up on the conference and these activities, but also about the Istanbul Programme of Action in general and the UN activities as a whole. So I think it is very important,” he concluded.

On Sunday, the Midterm Review is expected to adopt an outcome document paving the way towards the achievement of more goals for LDCs, a moment many of these journalists said they are awaiting with great anticipation.