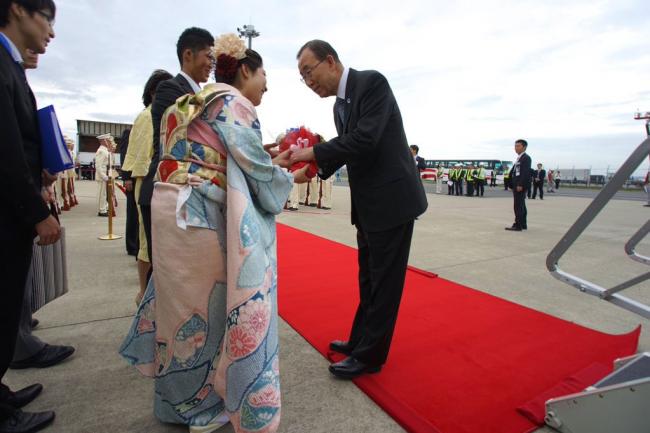 Having arrived in Nagoya just after the first-ever World Humanitarian Summit, which he convened in Istanbul, Turkey and which wrapped up this past Tuesday,  Ban, thanked German Chancellor Angela Merkel for participating and hailed the Summit as “a major advance in our collective thought and action in relation to humanitarian crises,” in light of the rising challenges the world faces and the resultant up tic in the cost of humanitarian response.

He recalled that 15 years ago the cost of responding to such needs was around $2 billion a year. “Now it is nearer $25 billion a year – that’s a 12 fold increase. The UN system lacks the capacity to respond to this level of need,” said the UN chief, reporting that the more than 9,000 delegates at the Summit conference, who were joined by some 177 government representatives had shown “much support” for the different elements within his Agenda for Humanity.

Indeed, he noted that many commitments were made at the Summit, including on new funds for education in crises and more efficient provision of assistance by major agencies. “I count on rich and powerful nations – including those of the G7 – to follow the example of  Merkel and support my Agenda for Humanity. I count on them to invest more in the prevention of conflicts and building resilience […] in ways that align with the 2015 Sendai Framework for Disaster Risk Reduction,” he stressed.

On climate change, the Secretary-General recalled that some 175 countries had signed the Paris Agreement in new York last month, and that overall, world leaders have shown extraordinary commitment to take climate action, noting particularly that 17 countries had already ratified the landmark accord.

“The target is that 55 countries reflecting at least 55 per cent of global emissions ratify [the Paris Agreement] before 31 December 2016. I understand that 42 countries reflecting 49 per cent of emissions expect to have ratified by the end of the year,” reported  Ban, urging all G7 nations and all leaders of European Union nations to “do all they can to ratify as soon as possible” and maintain the momentum of implementation.

Turning next to refugees and migrants, the Secretary-General said leaders of many nations are struggling as they respond to the inflows of millions of people for areas affected by conflict or climate change. “A global approach will help nations to respond more effectively to this challenge, he said, noting that the UN will convene a global summit on migration on 19 September.

As for global health,  Ban noted that several leaders and the World Bank had spoken on Friday about the generosity of the world’s nations in response to health crises – particularly the recent Ebola outbreak. Such contributions have been greatly appreciated. The UN had also developed an exceptional arrangement – the UN’s first ever public health mission – as our novel contribution for the Ebola response.

“In 2015, I established a High Level Panel, chaired by former President Jakaya Kikwete of Tanzania. The work was completed in January 2016 and has yielded 27 helpful recommendations. Most of them will be implemented: only a few are not practicable right now,” said  Ban, noting that some are relevant for responding to the current Zika virus outbreak, and that he is setting up arrangements to monitor progress with implementation of the recommendations and to review their impact.

Finally, the UN chief commend Prime Minister Shinzo Abe for setting up Japan’s centre for promoting the Sustainable Development Goals (SDGs) across Government and under his direct authority.

“I hope that all leaders will take full ownership of the 2030 Agenda for Sustainable Development: I encourage them to establish small high-level bodies to oversee cross-government implementation of the SDGs,” he said, adding that many governments had informed him that they will reflect the Agenda in all their investments, and that they are creating incentives for private finance to be spent towards those aims.