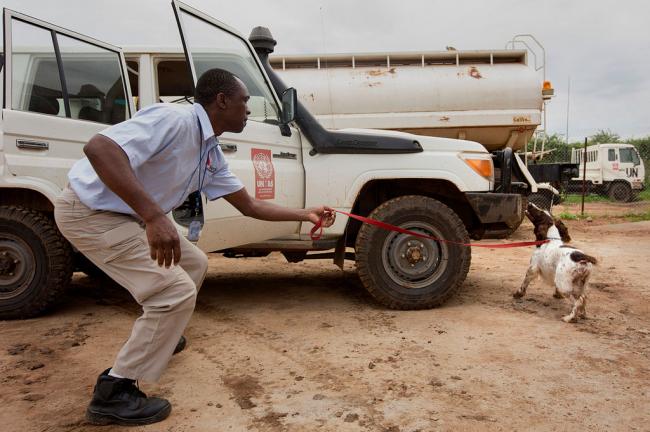 India Blooms News Service | | 28 May 2016, 11:05 am
#South Sudan, #UNSC
New York, May 28 (Just Earth News): The United Nations Mine Action Service (UNMAS) in South Sudan said on Friday it will receive 37 new explosive detection dogs as part of an increase in the presence of such dogs throughout the country.

In a press release, UNMAS said the explosive detection dogs regularly support UN Police (UNPOL) to conduct searches of protection of civilians sites, cargo and entry points, to detect prohibited or hazardous items, all of which are swiftly removed by UNPOL so that internally displaced people and others under the protection of the UN Mission in South Sudan (UNMISS) remain safe from harm.

Currently, UNMAS has six explosive detection dog teams that focus on entry point control and cargo searches in Juba. In 2015, 19,781 vehicles, 13,587 bags and 970 buildings were searched using these tea

Upon arrival, the dogs will be transferred to temporary kennels in Gumbo, Juba, where they will be acclimatized and paired with their future handlers. Once the dogs are settled they will be paired with expert handlers who will complete additional training tailored specifically to South Sudan, UNMAS said.

While some of the dogs will remain in Juba to work at the UN Thom Ping Base, UN House, the protection of civilians sites and the UN airport, many will be transferred to Bentiu, Bor and Malakal.

“The welfare of the dogs is of prime importance to UNMAS, as is the safety of the communities within which they will be working,” UNMAS said.