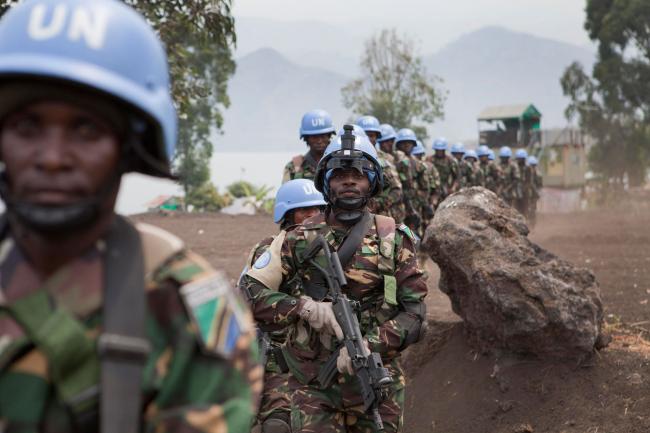 “Being a peacekeeper has always been about devoting a period of time of one's life to the noble ideals of peace and security. But it has taken a very specific dimension in recent years in view of the very dangerous situations in which we've been asked to step in,” Hervé Ladsous, Under-Secretary-General for Peacekeeping Operations, told the UN News Centre ahead of the International Day of UN Peacekeepers, marked annually on 29 May.

Just days before the interivew, five Chadian peacekeepers were killed and three others wounded in an attack in northern Mali. The attack by Islamic extremists, condemned by Secretary-General Ban Ki-moon as “heinous,” was also denounced by the Security Council.

This year's theme is “Honouring our Heroes,” a nod to the 125,000 military, police and civilian staff who serve in 16 peacekeeping operations around the world. The deployment is the largest in UN history.

At least 37 UN peacekeepers have been killed in the last four months. Since the start of UN peacekeeping operations in 1948, nearly 3,500 military, police and civilian personnel working under the UN flag have been killed, including 129 in 2015 alone.

Those 129 individuals were honoured last week with Dag Hammarskjöld Medals. In a special ceremony, the family of Captain Mbaye Diagne, whose bravery in Rwanda saved hundreds of people from genocide, was presented with an inaugural medal for exceptional courage in his name.

The 2016 commemoration marked the eighth straight year in which the UN has honoured more than 100 peacekeepers who lost their lives in the previous year in the line of duty.

“They are sacrificing their lives in the effort to bring peace and security to those who have otherwise been deprived of it,” said Atul Khare, the Under-Secretary-General for Field Support, whose Department works closely with the Department of Peacekeeping.

Khare is ultimately responsible for ensuring that the staff in UN Missions have the required food, water, camps, vehicles, fuel and other logistics so that they can do their jobs.

Among his goals is to work in a “more efficient, more effective and more responsible manner,”  Khare told the UN News Centre.

That means using a greater focus on technology and innovation, and working in closer partnership with local, regional and international groups to plan and share information.

“National ownership, consent of parties and impartiality. Those are the guiding principles of UN Peacekeeping and all the peacekeepers follow them,” noted  Khare.

He emphasized the word “responsibility” throughout the interview. He noted, for example, that his Department has the “responsibility to ensure that the mandates are actually met,” referring to the official order agreed upon by the Security Council on what the Mission will aim to do in a country. That responsibility extends to the countries that are providing the financial and human resources to the Mission.

The senior UN official also discussed the responsibility to the host country, referring also to the ethical conduct of peacekeepers.

“Wherever the peacekeepers are deployed the normal social contract has broken down,” he said. “In those parts where the conflict is rife, where the chances of corruption, the chances of fraud, the chances of sexual violence and conflict are all high, we must demonstrate so that those countries can, through our example partially, come back to normalcy.”

Khare, who is a former peacekeeper, also spoke about the responsibility to future generation to not use natural resources in excess and use as many renewable sources of energy as possible.

“We must respect the principle of doing no harm and that includes the necessity of looking at environment promotion and protection while we are deployed,” he said.

'Few contaminating the image of many'

A threat to UN peacekeeping also comes from some UN peacekeepers allegedly sexually exploiting and abusing the people who they are meant to protect.

“The totally unacceptable behavior of a few contaminates the image and the courage of the vast, vast majority of the colleagues,”  Ladsous said.

“It's also true to say that the countries that contribute the troops and police have never given to the UN the power to investigate or prosecute,” he continued. The UN now has a policy of naming the countries that are cited in allegations of sexual abuse and exploitation.

Among the topics that have been discussed to penalize such actions is for the alleged perpetrator to face a court martial in the country where the purported act occurred, as opposed to him being repatriated back to his home country.

Another idea is for criminal sanctions against the home country of the peacekeeper, with the aim of increasing checks on who is allowed to wear a UN uniform and his actions during that time.

The UN Secretariat is expediting guidance that will set out factors relevant to the decision to repatriate a military or formed police unit when there is credible evidence of widespread and systemic sexual exploitation and abuse.

“No State can allow a peacekeeper to turn into a predator,”  Khare said.

The main focus, both  Ladsous and  Khare stressed, needs to be on providing immediate assistance to the victim – medical and psychological – to help her or him overcome the drama.

A trust fund to support the provision of services to victims is operational, and that Member States have been requested to consider making contributions.

These efforts are overseen by Jane Holl Lute, the Special Coordinator on improving the UN response to sexual exploitation and abuse.