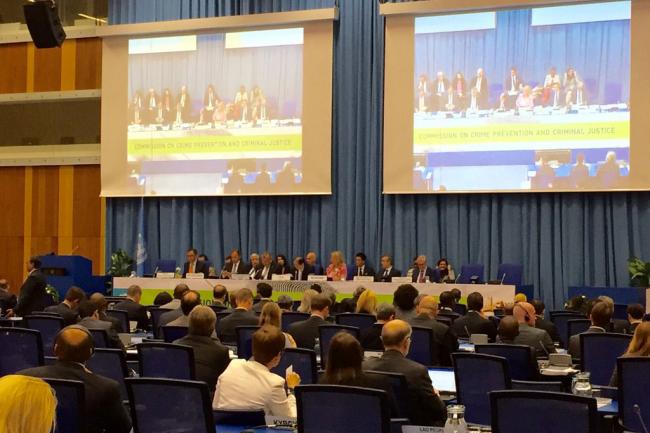 India Blooms News Service | | 24 May 2016, 08:01 am
#UN Crime Commission, #Vienna
New York, May 24 (Just Earth News): The main United Nations anti-crime forum opened in Vienna on Monday with calls to strengthen justice and the rule of law and help build resilient institutions in support of the global development goals, which recognize the connections between poverty, security, crime and corruption.

“I hope that at this session, you will seek to advance effective responses based on the tried and tested international framework provided by the conventions against transnational organized crime and corruption, the international counterterrorism instruments, and the standards and norms in crime prevention and criminal justice,” said Yury Fedotov, Executive Director of the UN Office on Drugs and Crime (UNODC) in opening remarks to the 25th Session of the Commission on Crime Prevention and Criminal Justice, which runs through 27 May.

He said this work is needed to disrupt criminal networks and terrorist outrages, and to counter violent extremism and radicalization to violence. It was also necessary to confront corruption and to enhance the administration of justice, including for children, as well as to respond to violence against women.

Fedotov noted that UNODC’s work supported the 2030 Agenda for Sustainable Development, and was “part of the unified responses needed to confront the many crises the world is facing.”

He emphasized that the implementation of the Doha Declaration, endorsed at the 13th Crime Congress last year, and the follow-up to the Sixth Session of the Conference of States Parties to the UN Convention against Corruption in Saint Petersburg in late 2015, were also key enablers for achieving the Sustainable Development Goals (SDGs), particularly Goal 16 on justice and building effective, accountable and inclusive institutions.

This year’s Crime Commission features about 50 side events and 14 exhibitions on crime prevention and criminal justice matters.

Six draft resolutions have been tabled on trafficking in human organs and trafficking in persons for the purpose of organ removal; promoting legal aid; restorative justice; strengthening technical assistance for the prevention of crime, including terrorism; follow up to the 13th Crime Congress and preparations for the 14th Crime Congress to be held in Japan in 2020; and youth crime prevention.

On the margins of this session, UNODC, with the International Consortium on Combating Wildlife Crime (ICCWC) partners, will launch the first-ever World Wildlife Crime Report.

INTERPOL and UNODC will sign an agreement to further enhance cooperation and contribute to effective action against terrorism, organized crime, smuggling of migrants and drug trafficking.

A tool developed by UNODC to assist in implementing the International Guidelines for crime prevention and criminal justice responses to trafficking in cultural property will be launched.

Fedotov said that the Commission has been at the forefront of efforts to improve justice system responses to such challenges as the flow of migrants and refugees, and UNODC remains fully engaged in advancing this work, also in view of the un General Assembly Summit on Addressing Large Movements of Refugees and Migrants to be held in September.