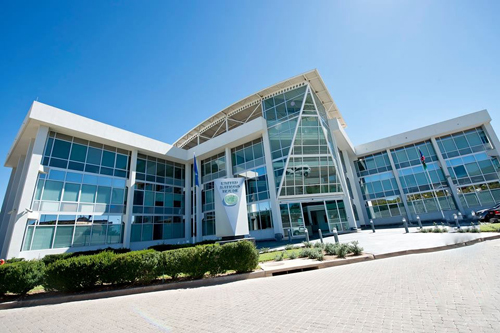 India Blooms News Service | | 25 Jun 2014, 03:09 pm
#Namibia
New York, June 25 (IBNS): Hailing the valuable history between the United Nations and the Namibian people, Secretary-General Ban Ki-moon arrived Tuesday in Windhoek to â€œwrite another chapter in our cooperation,â€ as he inaugurated the UN House there, which will help enhance the coordination of the world bodyâ€™s activities and agencies working in the country.

“This donation of the UN House is a stellar example of Namibia’s role in supporting the United Nations,” said Mr. Ban at the ceremony commissioning the facility, adding that: “We can all take pride in the accomplishments you have achieved in only 24 short years since independence in 1990.”

“I applaud Namibia for its tremendous progress on national reconciliation, press freedom, the adoption of human rights treaties, and substantial economic growth. Namibia’s sound economic policies have enabled it to transition to upper-middle-income status in a very short period,” said the UN chief. “This makes Namibia an economic frontrunner in Africa.”

He went on to commend Namibia for its invaluable support for UN peacekeeping operations and welcomed the country’s leadership as a member of the Human Rights Council. “I thank Namibia for presiding over the UN General Assembly during its 54th session for the negotiations which resulted in the establishment of the Millennium Development Goals (MDG),” he added.

As the UN prepares for the post-MDG period, Mr. Ban said he is pleased Namibia is playing a leadership role in developing Africa’s Common Position on the development agenda beyond 2015, the deadline for achieving the Goals.

“Namibia has also demonstrated its leadership in addressing HIV/AIDS, reducing poverty, protecting the environment and promoting gender equality,” he said. Namibia is also advancing a regional approach to migration issues in Southern Africa and mainstreaming migration in its development agenda.

“Of course, important challenges remain, most notably income inequality and unemployment, especially among youth. I understand that the current fourth National Development Plan aims to address these issues head on,” he said.

Mr. Ban went on to note that he is leading a global campaign to end all forms of violence against women and children. “We must all take steps to change harmful gender norms and support the empowerment of women and children,” he said, noting that the UN Partnership Framework recently signed with the Government has a specific outcome on gender equality and gender-based violence.

While in the Namibian capital, Mr. Ban met with President Hifikepunye Pohamba. According to a UN spokesperson, the two exchanged views on the situation in the Democratic Republic of the Congo and underscored the importance of united action by all actors in the region.

The Organization, through the early days of the League of Nations and later the UN, has had a long history with Namibia, formerly South-West Africa. In 1966, South African forces began combating an insurgency by the People's Liberation Army of Namibia (PLAN), the military wing of the Namibian-nationalist South West African People's Organization (SWAPO).

The height of the UN involvement came in 1967, when, during its fifth session, the General Assembly established a UN Council “to administer South-West Africa until independence, with the maximum possible participation of the people of the territory.”

The UN Transition Assistance Group (UNTAG) was the peacekeeping force deployed from April 1989 to March 1990 in Namibia to monitor the peace process and elections there. Namibia achieved its independence from South Africa on 21 March 1990.