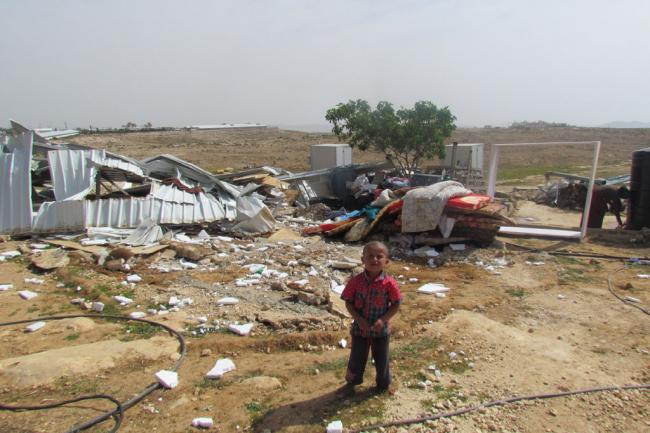 India Blooms News Service | | 19 May 2016, 08:05 am
#Israeli, # stop destruction of aid supplies, #OCHA
New York, May 19 (Just Earth News): The United Nations humanitarian coordinator for the Occupied Palestinian Territory on Wednesday condemned the demolition and confiscation of donor-funded humanitarian assistance by the Israeli authorities in the Palestinian community of Jabal al Baba.

In a press release, the UN Office for the Coordination of Humanitarian Affairs (OCHA) said that on 16 May, the authorities demolished seven homes and confiscated materials for three others, resulting in nine Palestine refugee families – comprising a total of 49 members, 22 of them children – being left without shelter.

“Despite the obligation on Israel under international law to facilitate rapid and unimpeded passage of relief to those who need it, humanitarian relief to vulnerable communities like Jabal al Baba is increasingly under attack,” said Robert Piper, UN Coordinator for Humanitarian Aid and Development Activities for the Occupied Palestinian Territory.

The materials were part of a humanitarian aid package for vulnerable Palestinian Bedouin families, provided by the UN’s Humanitarian Pooled Fund earlier this year.

Jabal al Baba, located to the east of Jerusalem in an area planned for the expansion of the Ma’ale Adumim settlement (the E1 plan), is one of 46 communities in the central West Bank considered at high risk of forcible transfer, OCHA said.

“The destruction of homes and of livelihoods creates pressures on households to move, exacerbating the risk of forcible transfer which would be considered a grave breach of the Fourth Geneva Convention,” OCHA said.

Already in 2016, more than 600 structures have been demolished or confiscated across the West Bank, far exceeding the total for all of 2015, OCHA said. In their wake, more than 900 people have been displaced from their homes and a further 2,500 have seen their livelihoods affected.

“Once again, we call on Israel to respect the rights of these vulnerable communities and to leave these households in peace,” said  Piper.