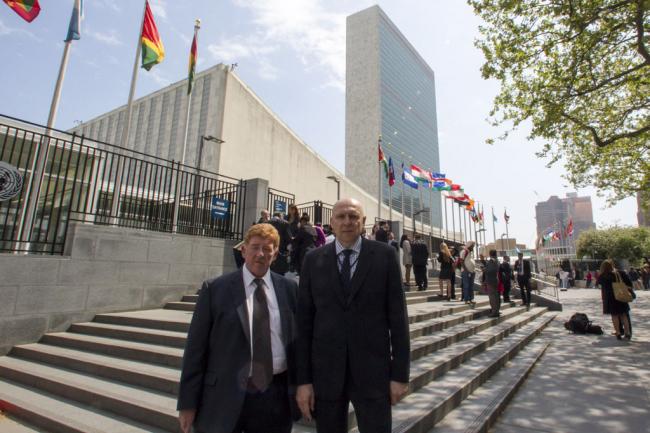 PODCAST: Hunting a war criminal from the former Yugoslavia

India Blooms News Service | | 29 Apr 2016, 08:06 am
# International Criminal Tribunal, #Yugoslavi, # UN Radio
New York, Apr 29 (Just Earth News/IBNS): Two policemen working for the United Nations in the 1990s who were tasked with tracking down alleged war criminals from the former Yugoslavia have been talking about the â€œhorror storiesâ€ they heard from the families of victim.

In the latest episode of the UN Radio podcast series the The Lid is On, Vladimir Dzuro from the Czech Republic and Kevin Curtis from the United Kingdom, tell how they tracked down and arrested the first alleged war criminal to be brought to the UN International Criminal Tribunal for the former Yugoslavia, (ICTY) based in The Hague, in the Netherlands.

The ICTY was established in 1993 by the United Nations to prosecute serious crimes, including genocide, war crimes and crimes against humanity, during the Balkan wars of the 1990s, and has been described by current Prosecutor of the tribunal, Serge Brammertz, as a success story for the UN.

The story begins in the small town of Vukovar, in modern day Croatia, and the exhumation of bodies from a mass grave.

“It was overall quite an experience, even for a police officer,” said Vladimir Dzuro, a former homicide detective in Prague. “There was a terrible stench because of the decomposition.”

Some 261 people, mainly Croatians were buried in the mass grave. They had been summarily executed by Serbian paramilitaries and Vladimir Dzuro and Kevin Curtis were tasked with finding the perpetrators.

The former mayor of Vukovar, Slavko Dokmanovic, was identified as one of those perpetrators.

“My role was to befriend him so that we could get him into a position where we could arrest him,” said Kevin Curtis. “My goal when I went to see him was to charm him.”

Listen to the ‘The Lid is On’ and find out about the role that Kevin Curtis and Vladimir Dzuro played in the historical arrest of Slavko Dokmanovic.