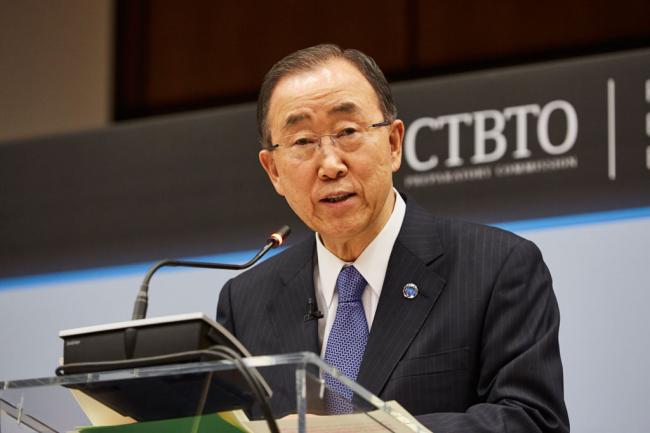 India Blooms News Service | | 28 Apr 2016, 08:12 am
# Comprehensive Nuclear Test-Ban Treaty Organization (CTBTO), #Ban Ki-moon
New York, Apr 28 (Just Earth News/IBNS): Marking the 20th anniversary of the Comprehensive Nuclear Test-Ban Treaty Organization (CTBTO), United Nations Secretary-General Ban Ki-moon said on Wednesday that instead of a celebration, the occasion is a call to action on the work that remains to be done to end nuclear testing and continue on an environmentally sustainable path.

Speaking at a panel discussion in Vienna,  Ban commended the CTBTO for its two decades of service as a global leader on ending nuclear testing.

“The CTBTO has proven its value again and again,” the UN chief said. “This organization is at the forefront of detecting possible nuclear tests. It has carried out activities far beyond what anyone imagined.”

The CTBTO is mobilizing young leaders and veteran officials,  Ban noted, with “sound science, a global reach and a noble mandate,” and the verification system is 90 per cent complete.

“During the Fukushima crisis and again with the recent test by the Democratic People’s Republic of Korea, the CTBTO proved its worth,” the Secretary-General said.

“There has been great progress. The norm against nuclear testing has only been broken by three States – and only one in this century,” he added.

Recalling that he served as Chairman of the CTBTO nearly 20 years ago,  Ban said that he has been committed to ending nuclear tests since long before he became Secretary-General.

“Over the past decade, I have done everything possible to push this issue up on the international agenda,” he emphasized.

While he welcomed the voluntary moratoria against nuclear testing, he said that action would never substitute for a legally binding CTBT.

“We are here to honour the victi The best tribute to them is action to ban and to stop nuclear testing. Their sufferings should teach the world to end this madness.”

In that vein, he reiterated a call to the eight remaining States to sign and ratify the treaty “without further delay.”

“The eight countries that must ratify for entry into force have a special responsibility. They can advance us on the road to a nuclear-weapon-free world,” the UN chief said. “All countries can add to the pressure by ratifying. This strengthens the norm of universality. And it shows the world is united against nuclear tests.”

It is for this reason that the treaty forms a central part of his Five Point Proposal on nuclear disarmament, the Secretary-General said.

“Tell them, tell your leaders and tell those countries who have not ratified yet that this is the world where I will live, and my children, and my great-great grandchildren will live. Therefore make sure that there is no fear of nuclear weapon testing,” he added.

Ban emphasized that while the Paris Agreement on climate change had been signed this past week in New York by a record-breaking number of countries, in order to make the world environmentally sustainable, there should be no further nuclear testing.

“Our planet still faces, however, the threat of nuclear weapons,”  Ban said. “Let us pledge on Wednesday that we will not cease until all States are party to the Treaty. That way we can leave a safer world, free of nuclear tests, to our children and to succeeding generations of this world.”