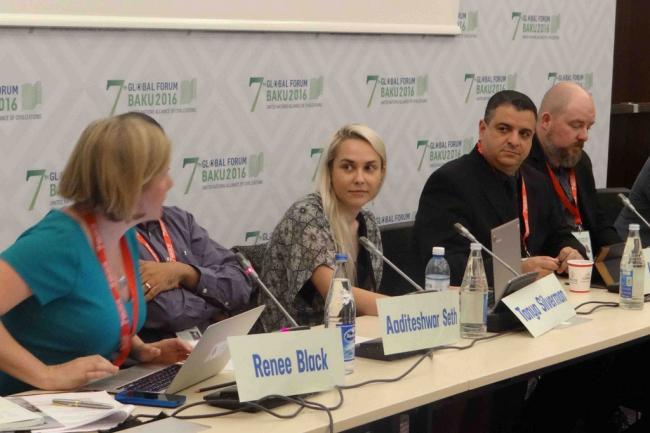 India Blooms News Service | | 28 Apr 2016, 08:00 am
#Baku , #United Nations Alliance of Civilizations
New York, Apr 28 (Just Earth News/IBNS): â€œIn a virtual world, everyone can be a world-saving hero,â€ an Arab entrepreneur from Israel told the UN News Centre in Baku, underscoring the potential of online games to bridge the divide between young adults in conflict zones and foster inclusive society.

Hans Shakur, a co-founder of GamesForPeace, a growing non-profit initiative that started two years ago as a pilot, was among the panelists invited to the 7th Global Forum of the United Nations Alliance of Civilizations (UNAOC) under way in the Azerbaijani capital.

The Forum, which kicked off yesterday, is bringing together nearly 3,000 participants, including Heads of State and Government, political officials, civil society representatives, religious and youth leaders, who will exchange their perspectives under the main theme on 'Living Together in Inclusive Societies: A Challenge and A Goal.'

In the virtual world, everyone is on the verge of an epic win, everyone wants to be the best version of himself...everyone considers themselves world-saving heros

“This is a growing community of enthusiastic people believing that computer games, together with social media, can represent a radical new way of bridging the gap between teenagers in conflict zones,”  Shakur said, expressing hope that the initiative will create harmony not only among the gamers but also make “a real impact” on the ground.

Coming from a region of longstanding conflict between Israelis and Palestinians, he craves lasting peace in the Middle East.

“Considering the hot issues the world is suffering on Wednesday, we started as a pilot to explore what the virtual gaming environment can do to affect the real world,” he said.

Capitalizing those values, he and his partners founded GamesForPeace, which uses popular mass games entailing communication, collaboration and creativity. Gamers engage in dialogue without any political agenda.

“Once they play together and talk each other, we can break the barriers, barrier of fear, fear of others,” he said.

Once they play together and talk each other, we can break the barriers, barrier of fear, fear of others

The real benefit of this initiative is that by playing together, they realize who they thought are enemies are not exactly the enemies. Having dialogue itself is a counter-narrative to hate speeches.

Shakur is keenly aware of the difficulty in making peace in the Middle East.

“We don't know if this is the best way for peace, but we hope so,” he said, adding that the gamer community is snowballing. GamesforPeace has run a pilot in Eastern Europe and Spain, trying to develop into a platform that can make more impactful epic changes on the ground, such as in Africa.

He was among the panelists for a breakout session 'Counter-Narratives to Cyberextremism through Apps and Video Games,' which explored what role information and communication technology (ICT) can play in peace-building and inclusion efforts. While ICT can be used to spread hatred, it has also the capacity to empower counter-narratives, facilitate inclusion, and deter racism and all forms of hateful expressions towards minorities.

The panel also stressed the need for policy makers to take stock of the promise ICT holds for development.