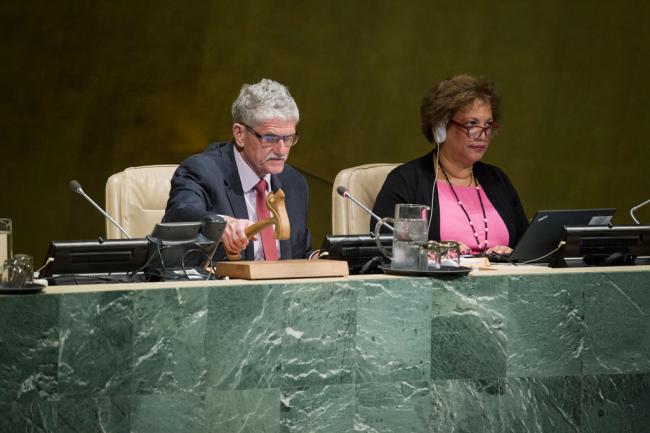 Chernobyl: with disasterâ€™s effects still being felt after 30 years, UN renews commitment to a safer future

India Blooms News Service | | 27 Apr 2016, 08:02 am
#Chernobyl, # Chernobyl nuclear accident
New York, Apr 27 (Just Earth News/IBNS): Marking 30 years since the Chernobyl nuclear accident, senior United Nations officials on Tuesday underlined the need to take stock of the lessons learned from the disaster and the many problems that still linger, while renewing their commitment to a safer future.

“On Tuesday, we remember the human cost of the disaster. We remember those who sacrificed their own lives to prevent this disaster from becoming even worse,” Mogens Lykketoft, the President of the General Assembly, told delegates attending a commemoration at UN Headquarters in New York.

Thirty years ago, the accident – widely considered one of the most severe in the history of the nuclear power industry – caused a huge release of radio-nucleoids over large areas of Belarus, the Russian Federation and Ukraine, devastating the region’s mostly rural economy and uprooting more than 300,000 people.

“Livelihoods lost almost 30 years ago have yet to recover fully and many affected are still struggling to overcome poverty, exclusion and the stigma of contaminated regions,”  Lykketoft noted.

He highlighted that this year, along-side this 30th anniversary, the global community is also marking the end of the Decade of Recovery and Sustainable Development for Chernobyl-affected Regions, with a series of activities taking place in the affected countries included a high level conference in Minsk which began yesterday. A photo exhibition entitled ‘Chernobyl, tragedy, lessons, hope’ is also on display at the UN in New York.

Speaking at the event on behalf of UN Secretary-General Ban Ki-moon, Chef de Cabinet Edmond Mulet said the tragedy of Chernobyl will always be linked with nuclear safety.

“The accident led to a new awareness of safety issues and to major improvements in the regulation of nuclear plants around the world. The Chernobyl disaster also brought the international community together to support the enormous efforts of local, regional and national authorities,” he said.

Noting that the most visible sign of current international cooperation efforts may be the New Safe Confinement structure – which is now nearing completion and should make the reactor complex stable and environmentally safe for the next 100 years –  Mulet said the World Humanitarian Summit in Istanbul next month will ask leaders to consider multidisciplinary strategies that include prevention, preparedness and response.

‘Complacency must be avoided at all costs’

Echoing this message in a statement issued from Vienna, Austria, the Director General of the UN International Atomic Energy Agency, Yukiya Amano, said Chernobyl led to a leap forward in global cooperation on nuclear safety, including the adoption of the Convention on Nuclear Safety.

“Countries with nuclear power began sharing information and experience in a way they never had before. The IAEA’s mandate on nuclear safety was enhanced. IAEA Safety Standards were expanded,” stated the IAEA chief.

However, despite these improvements, he said the world was confronted with another serious accident at the Fukushima Daiichi nuclear power plant in Japan in 2011.

“In the five years since then, considerable improvements have been made in nuclear safety throughout the world,” he added. “But the key lesson from both Chernobyl and Fukushima Daiichi for everyone involved in nuclear power – plant operators, governments and regulators – is that safety can never be taken for granted. Complacency must be avoided at all costs.”