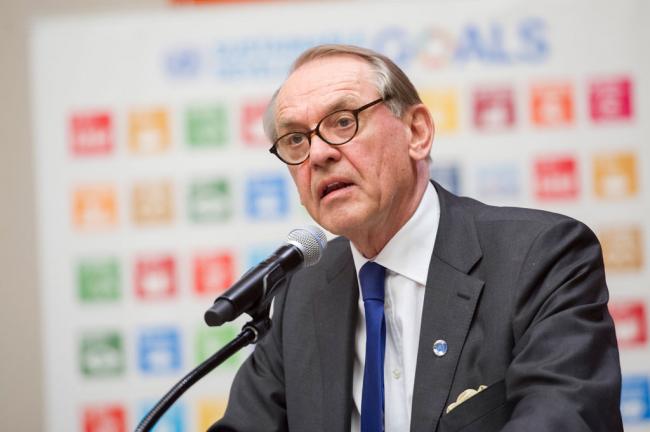 India Blooms News Service | | 21 Apr 2016, 07:45 am
#Africa, #United Nations
New York, Apr 21 (Just Earth News/IBNS): The United Nations and African countries are working as one to support the continentâ€™s people in realizing their hopes and aspirations for peace and development, which will require â€œbold and decisiveâ€ action, Deputy Secretary-General Jan Eliasson said on Wednesday at a special event on the continentâ€™s future.

Last year, when the world adopted the historic 2030 Agenda for Sustainable Development as well as the Paris Agreement on climate change, Africa adopted its own transformative Agenda 2063 and Ten-Year Implementation Plan.

“These global and regional frameworks share a focus on people and their well-being on a healthier planet. They include pledges on justice and are rooted in respect of human rights,”  Eliasson told delegates attending a High-Level Forum entitled The Africa We Want in 2030, 2063 and Beyond.

According to the UN, both the 2030 Agenda and Africa’s Agenda 2063 aim at structural transformation and a more equitable sharing of income and wealth, stressing inclusive growth and sustainable development. “These high ambitions require bold and decisive action from everyone involved. The people of the world are looking to their leaders on all levels to act and to be accountable for their actions,” said the UN deputy chief.

Organized by the African Union, the Government of Sweden, and the UN Office of the Special Adviser on Africa, the meeting aims to delve into thematic areas which exhibit a strong link between the agendas. In his remarks,  Eliasson underlined his wish to focus on three points in particular:

Women’s empowerment is one of the main themes of the meeting and a vital area for the global community’s work;
Both agendas stress the importance of ending conflict, through Sustainable Development Goal 16 and Agenda 2063’s aspiration for “a peaceful and secure Africa”;
Sufficient resources, both in terms of capacity and, financing, will play a decisive role in tackling the UN and African agendas.

“Carrying out these agendas will require stronger policy-making capacities and effective cooperation and coordination,” the Deputy Secretary-General insisted, adding that there is work to be done on data, indicators, and monitoring mechanis