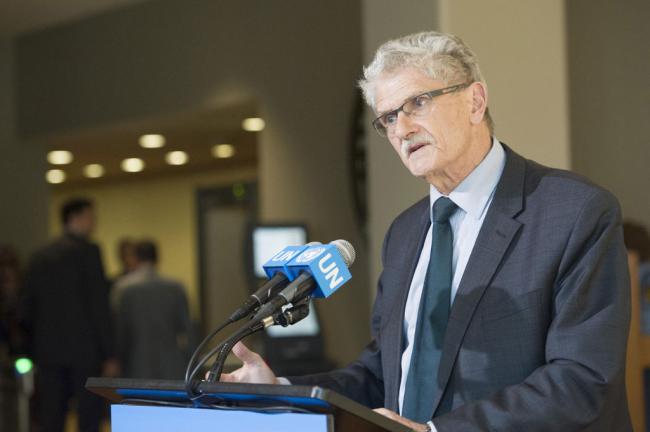 India Blooms News Service | | 16 Apr 2016, 08:18 am
#Selection of UN Secretary-General, #UN
New York, Apr 16 (Just Earth News/IBNS): Three days of informal briefings came to an end yesterday, after nine candidates for the position of the next United Nations Secretary-General answered all together some 800 questions from the UN membership and the public on how, if selected, they would lead the world body.

“We have established a new standard of transparency and inclusivity for the appointment process, but it has the potential also to influence the final outcome of the selection of the Secretary-General,” UN General Assembly President Mogens Lykketoft told reporters at the conclusion of the unprecedented public dialogues.

Starting on Tuesday, each candidate was given a two-hour televised and webcast timeslot. Prior to opening up the floor for questions from UN delegates and civil society representatives as well as from the public through social media, candidates gave short oral presentations – their “vision statements” – addressing challenges and opportunities facing the UN and the next Secretary-General.

Below is a list of candidates in the order they appeared before the Assembly:

According to  Lykketoft, almost every country was represented in the audience to ask questions during the dialogue. “My impression is – of course my experience is short – but during the months I’ve been here, we never had that frank and substantial discussion about the future of the United Nations as the one we got during these informal dialogues,” he said at the media stakeout.

Lykketoft also told reporters that these past three days are just a part of the “process of transparency” and that he hopes they will help generate wider discussions about the selection of the UN chief.

With more candidates possibly joining the current nine, more informal briefing could be held in the coming week and months.  Lykketoft noted that he was inspired by the interest the public has shown in this selection process, with more than 227,000 people from 209 different countries and territories having visited his website.