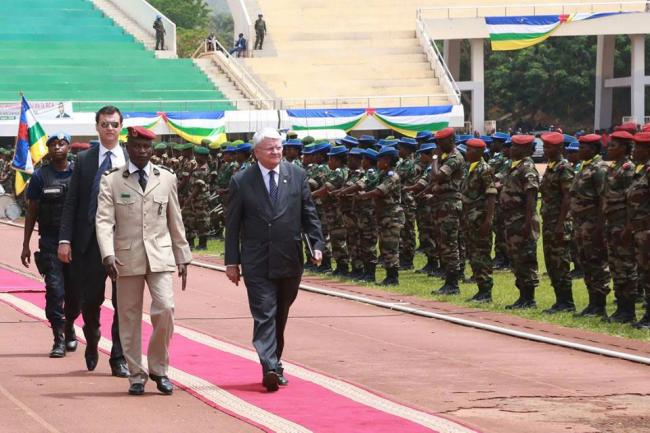 Briefing the Security Council, UN Under-Secretary-General for Peacekeeping Operations Hervé Ladsous noted that the country formally ended its political transition with Faustin Archange Touadéra sworn in as President on 30 March.

“The promulgation of the new constitution by the outgoing Head of State of the Transition on the day of the inauguration symbolized a return to constitutional order and marked an important milestone after three years of crisis,” he said.

On 31 March, the country held the second round of legislative elections. The final results of this round were announced on 5 April, and the President has since moved quickly on the formation of a new Government.

The new cabinet is leaner than the previous one, with some 23 ministerial posts, including four women and four members of the Muslim community. While the new government includes representatives from all 16 prefectures, no armed group representatives are among the new cabinet members, he said.

The new President vowed publicly to respect the newly-promulgated Constitution – including the two term limit for presidential mandates – and work towards national unity. “The President shared with me that his priorities for the country would be to re-establish security and to further reconciliation, economic and social development and good governance,” said  Ladsous.

Such important efforts provide the foundation for long-lasting peace for all throughout the country and showcase once again the resilience of the Central African people and their desire for peace and unity.

“The Central African Republic has passed a critical milestone,”  Ladsous said, noting the importance of building on the positive momentum created by the electoral process. The establishment of a lasting peace and stability would require making rapid progress in disarmament, demobilization, reintegration and repatriation, reforming the security sector and improve access to justice.

“Sadly, these positive developments in the country have again been overshadowed by allegations of misconduct and sexual exploitation and abuse by MINUSCA and international forces,” he said.

The UN stands firmly behind the victims that showed courage in coming forward and continue to work to ensure that they receive the assistance and justice they deserve, he said.

With MINUSCA's mandate set to expire on 30 April, the Secretary-General has recommended a technical roll-over of its mandate to allow the Secretariat to fully consult the new Central African authorities before making recommendations to the Security Council for the missions new operating procedures, he noted.